The Toyota GT 86 makes a practical tourer for two, but don't coun on it for the school run

The GT86 is a 2 plus 2, which means it comes with a back seat divided into a pair of buckets with safety belts for two passengers. It may as well not have any though, as it’s so cramped back there as to be virtually unusable by anyone out of junior school.

But that’s not really the point of the GT86, and for those up front there’s plenty of space to enjoy. For the driver there’s plenty of seat and wheel adjustment, although the low-slung driving position could hamper the view out if you’re short in stature – which would be particularly noticeable if you came to the Toyota from a sporty hatchback.

The big rear wing on the Aero model means rear visibility was compromised on that version, especially over the shoulder. Rear parking sensors are only available as an option for around £250.

There’s a surprising amount of cabin storage if you're travelling two-up, though, with big door bins and a decent glovebox, as well as space for your phone and drinks in the centre console.

As you’d expect from a proper sports car, the GT86 sits quite close to the ground. At just 1,285mm tall it’s nearly 7cms lower than an Audi TT. The Toyota is 4,240mm long, so 6cms longer than the Audi. 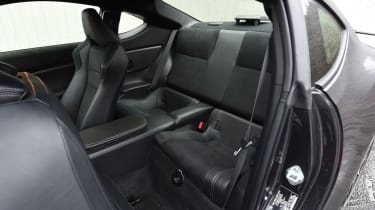 Legroom in the back seats is limited for even the smallest occupants, so the rear is only really useful as extra storage space. Even trying to accommodate a single person sitting sideways across the rear seat is made trickier by the central console that extends right through the car to the rear seat back.

You do get Isofix mounts for child seats, though, although getting the kids strapped into them might feel like a bit of a chore if you have to do it more than occasionally. 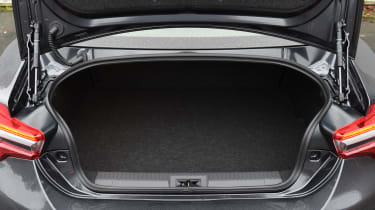 You don’t buy a GT86 for practical reasons, but it does come with a 237-litre boot, which is easily big enough to take the weekly shop or use on a weekend away. The back seats fold in a 50:50 split, and the car’s designers claim the space is big enough for you to carry a full set of wheels and tyres – the idea being you can take a set of sticky rubber with you if you head out for a track day.