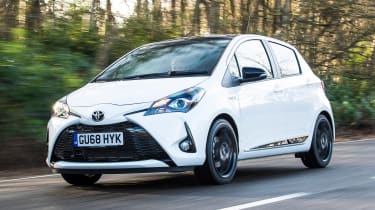 The Yaris GR Sport is a Toyota after a slice of the ST-Line pie. The likes of Ford and Volkswagen have seen huge success in adding racey trinkets to their humble hatchbacks, but the Yaris can’t match their rounded appeal. It gets the styling, suspension and steering from a hot hatch, but the powertrain from an eco-focused small car. No matter which you want, there are more convincing ways to spend £20,000.

The Yaris is an important car for Toyota. Its hybrid powertrain is unique in the supermini segment, and since 2017 it’s been the brand’s motorsport front man – chosen as the car to re-launch Toyota’s World Rally Championship ambitions.

It’s also been the launch pad for the brand’s new performance division, with the arrival of the rowdy, supercharged, 209bhp Yaris GRMN. However, Toyota hasn’t finished experimenting with its Ford Fiesta rival just yet.

Which leads us neatly to this: the new Yaris GR Sport. It’s a go-between for the standard Yaris line-up and the limited-run hot hatch variant, sprinkled with some GRMN trinkets and trickery. 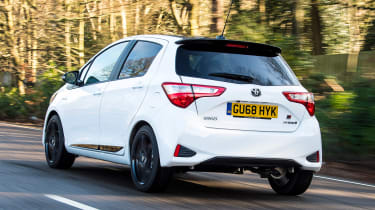 Injecting a bit of sporting flair into the more mundane end of the line-up, the GR Sport gets a set of gloss black 17-inch alloy wheels shod in Bridgestone Potenza rubber. Inspired by the full-fat GRMN, it also gets a black roof, spoiler and mirrors, as well as a honeycomb-effect grille.

It’s a similar story inside, with a large pair of Ultrasuede sport seats, plus the small but perfectly formed steering wheel from a Toyota GT 86.

But, the warm Yaris gets more than just a visual makeover. The GR Sport also gets some serious suspension revisions to go with its racier looks. You’ll find a set of Sachs shock absorbers similar to the ones on the GRMN, as well as a solid anti-roll bar for improved rigidity. The suspension has been lowered 15mm, too.

The changes aren’t matched to anything new under the bonnet, though, meaning the mid-spice Yaris is equipped with the supermini’s trademark hybrid powertrain.

Performance is sluggish (0-62mph takes 11.8 seconds) – and that’s before we even mention the CVT transmission, which just doesn’t work in a car with performance pretentions. It’s noisy under hard acceleration, and unlike rivals the gearbox cannot be controlled via steering wheel paddles. 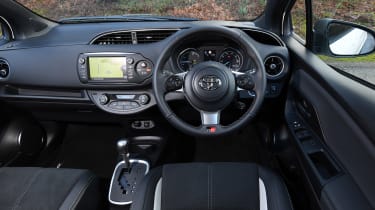 The Yaris GR Sport rides with a firmness that makes a Ford Fiesta ST look comfortable, too; it crashes over potholes and refuses to truly settle at speed. The swift, well-weighted steering is better, delivering a welcome shade of agility to the way the Yaris GR Sport changes direction.

Look at the price list and it becomes even more difficult to justify. The Yaris Hybrid starts from £16,790, making it a pricey but remarkably efficient supermini. The Yaris GR Sport version tacks on a £3,045 premium, taking things to a Fiesta ST-rivalling £19,835.

It’s a shame, because Toyota could have used this as a positive springboard for its GR Sport trim line. Matched to the forthcoming Corolla’s TNGA platform, we could see the suspension and steering tweaks working to good effect. Here, however, it can only be filed as a missed opportunity.