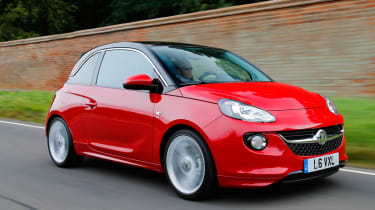 The Adam is a smart and fun-filled city car. It’s exciting to drive with a bold image that takes in-car customisation and gadgets to new heights for this market – so there’s plenty here to praise. But the cramped rear and lack of a sub-100g/km model could put off buyers who are already spoiled for choice. Still, the Adam is well priced against its competitors if you don’t go mad on the options, and deserves to be a success.

Naming a car after the boss of the company worked out well for Ferrari, with the Enzo – but will it be a similar success story for the Adam? It’s named after the founder of Vauxhall’s sister company, Adam Opel, and it’s predicted that over half of Adam buyers will be new to Vauxhall.

The stakes are high for this car, then – and the competition is fierce. The aim with the Vauxhall Adam was to take on retro rivals like the Fiat 500 and MINI, while offering an interesting alternative to the straight-laced Audi A1.

There’s a choice of three petrol engines: a 69bhp 1.2-litre and a 1.4-litre with 86bhp or 99bhp. All come with a five-speed manual gearbox and the option of stop-start – and as a result they emit between 119g/km and 129g/km of CO2 and claim to return fuel economy of well over 50mpg.

We tested a 99bhp 1.4-litre model with stop-start. It doesn’t sound like a recipe for driving thrills, and we were worried it would feel sluggish with its official 0-60mph time of 11.5 seconds. But on the road, the keen engine thrives on revs and gives the Adam an eager, nippy character.

Our test model was a top-spec Slam – it sits above the Jam and Glam in the range – and featured sports suspension and optional 18-inch alloy wheels, so it resisted body roll well in corners.

But the biggest surprise was the well weighted steering and brakes, which give you the confidence to chuck the Adam around like the best city cars. This set-up makes for quite a firm ride, but crucially it’s never uncomfortable – even over large bumps in the road.

In contrast to its competitors, there’s nothing nostalgic in the Adam’s design. There are clear nods to the rest of the Vauxhall line-up – with the familiar creases in the doors from the Astra GTC giving the car a sporty stance – but details like the contrasting floating roof and slim bonnet-mounted headlights are unique to the Adam.

The new car looks a bit like a miniature A1, but the quirky styling is designed to be a blank canvas that buyers can then personalise however they want to. The three trim levels use themes that can be upgraded with a vast array of options to suit each owner’s personal taste.

Standard kit is very generous whichever model you go for, and even the cheapest Adam gets 16-inch alloy wheels, air-con, a DAB radio, Bluetooth and cruise control. Given that prices start at just £11,255, that makes the car good value, and also puts it well within the reach of the younger buyers Vauxhall is targeting.

Our Adam Slam was at the other end of the scale, with such a broad variety of optional extras that the price had risen to an eye-watering £18,655. That puts it in the same bracket as a well kitted-out MINI Cooper or A1 S line – and the Vauxhall’s interior is a match for both of these cars in terms of quality and design.

Stunning details like the thick-rimmed leather steering wheel and deep-cowled silver dials are a world away from the flimsy plastics we’re used to in the Corsa. Audi-style rotary switches for the climate control and coloured panels ensure the Adam has the wow factor.

But the real highlight inside is the new IntelliLink infotainment system. This great-value £275 option is available on all models and brings a seven-inch hi-res touchscreen that allows owners to connect their Android or Apple smartphones via USB. They can then do everything from listen to music to view photos and even watch videos when the car is stationary. As on the new Renault Clio’s R-Link system, there are downloadable apps, too, including a full sat-nav and radio podcast app, with more to follow shortly after the launch. We tried it with an iPhone and the system worked well, with the layout proving intuitive and the screen responsive.

Our criticisms? Well, like the MINI the Adam is short on space, and the 171-litre boot and cramped rear mean it can carry four people only on shorter trips. Those clambering into the back will also notice the build quality deteriorates the further you get from the driver. And as our pricey test model proves, if you get carried away with options, personalising your perfect Adam can be an expensive business.

Vauxhall has put a lot into this car, and it shows. But only time will tell whether people will buy into the Adam brand as they have with the 500 and MINI.