While some Adams can get near 60mpg economy, no model emits less than 100g/km of CO2

Just as the Vauxhall Adam trails the class leaders on performance and driving fun, it can’t quite match its rivals on efficiency and running costs.

The only Adam engine to feature up-to-date WLTP figures is the sole 1.2-litre petrol that forms the car’s run-out specification. Economy is quoted at 41.5 to 44.8mpg, while CO2 emissions sit at 128g/km for a first-year road tax bill of £170 (usually included in the on-the-road price). Company car users can expect a 29 per cent Benefit in Kind rate.

It’s important to note that the rest of the Adam’s engines – now discontinued – feature economy and emissions figures generated through the old NEDC test regime. This means that the following figures will not be truly representative of real-life use.

If you’re considering the 69bhp 1.2-litre or 99bhp 1.4-litre models, it’s worth opting for the ecoFLEX versions, as they come with stop/start and other fuel-saving measures. These tweaks cut claimed emissions from 125g/km to 115g/km on the 1.2 and 118g/km on the 1.4. If you're looking at a used Adam, then it's worth doing some research to find a car registered before April 2017, as this will have cheaper road tax than a car registered after that.

The Adam S comes with stop/start, but doesn’t benefit from a full suite of ecoFLEX technology, so its claimed CO2 emissions are relatively high, at 139g/km.

At the other end of the range, the greenest Adam is the 1.0i three-cylinder. It uses ecoFLEX tech to match the claimed fuel economy figure of the 1.2i ecoFLEX model, at 57.6mpg, but it has lower CO2 emissions of 112g/km. 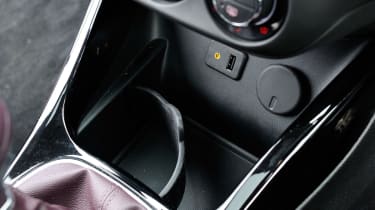 All Adam models claim official fuel economy in excess of 50mpg, with the exception of the Adam S (which returns a claimed 47.9mpg). Claimed consumption figures range from 52.3mpg for the non-ecoFLEX, normally aspirated 1.4-litre model to 57.6mpg for the 1.2i ecoFLEX and 1.0i.

Fitting 17 or 18-inch alloys to models with smaller standard wheels can have a very minor detrimental impact on economy and emissions. Yet strangely, the Adam Rocks, which is 25kg heavier than a standard model with an equivalent engine and has at least 17-inch alloys, brings no penalty in terms of mpg or CO2.

Badge appeal is a critical factor when it comes to depreciation, and unfortunately the Adam's Vauxhall griffin isn't as attractive to buyers as MINI's winged badge or even the Fiat 500's retro charms. New Adams are worth around 29 per cent less after three years, compared to 45 per cent for the MINI range. However, that does mean that if you're looking at a used Adam, you'll get a lot of stylish supermini for the money.