The Adam looks great and has a funky interior, with enough personalisation options to make your head spin

There seem to be two ways for the modern city car to go on the styling front: they either try to look modern or retro. In the modern camp, we have the likes of the Hyundai i10, as well as the near-identical Volkswagen up!, Skoda Citigo and SEAT Mii trio, while on the retro side there’s the Fiat 500.

The Adam takes the modern approach, featuring the latest Vauxhall front-end design language with a prominent Griffin badge. Having said that, the curves of the roofline and elsewhere on the bodywork do give the Adam something of the cute profile that marks out the Fiat 500.

As you’d expect, there’s huge scope to customise the car, with graphics, different wheels and various paint finishes. It’s easy to get carried away, though, and some additions can make the Adam look a little garish.

Climb aboard and it’s clear that Vauxhall has worked hard to create a classy atmosphere. From the slick dashboard to the high-quality materials, the Adam feels a cut above rivals like the DS 3. Highlights include the body-colour trim set into the dash, the chrome-ringed dials and the chunky leather steering wheel.

As with the exterior, the sky’s the limit when it comes to personalisation. There are 18 seat finishes to pick from, plus more than 20 trim insert colours and five options for the roof lining, including a ‘starlight’ version that uses 64 LEDs to create a sense of the sky at night.

Trim levels comprise Jam, Glam and Slam. The Adam Rocks has a broadly similar spec to the Slam, although climate control – standard from the Glam upwards – is an option. The Rocks comes as standard with manual air-conditioning, like the Jam.

As well as air-con, Jam models have a CD stereo with USB and aux-in connectivity, and controls mounted on the leather steering wheel, plus Bluetooth. They also get cruise control and a trip computer, plus ESP, ABS, a tyre pressure monitoring system, six airbags, 16-inch alloys and daytime running lights.

Glam trim builds on this with climate control, a fixed panoramic sunroof and DAB. Body-coloured door handles also set it apart, as does some chrome trim outside and on the door sills, while the daytime running lights and tail-lamps are upgraded to LED units.

Energised spec - based on Jam - is designed to take away the often confusing customisation choice and offer a specced-up, out-of-the-box model with less choice. It only comes with the base 1.2-litre petrol, which is a shame. It adds 17-inch black alloys, black detailing, and LED running lights, plus inside you get part leather seats, alloy pedals and Vauxhall's 'Intellilink' system.

Slam spec is mainly marked out by styling tweaks, with 17-inch alloys, sports suspension, a black roof and door mirrors, plus tinted rear windows. It also benefits from the Vauxhall OnStar connectivity package – this is featured on the Adam Rocks and Adam Rocks Air, too.

The higher-riding, crossover-style versions of the Adam get Morrocana seats and earthy interior trims, to hint at their rugged visual appeal on the outside. And the Adam Rocks Air is set apart from the Adam Rocks by its full-length fabric sunroof. The Air carries a premium of around £1,000 over the standard Rocks when specified with the 1.0 and 1.2-litre engines, but it isn’t quite so much extra with the 1.4-litre engine.

At the top of the range, the Adam S costs around £1,500 more than a 1.0i Adam Slam and has 18-inch wheels, a bodykit at the front, sides and rear, switchable ESP-plus and the brakes from a Corsa VXR. Buyers of this model can also specify figure-hugging Recaro sports seats.

It’s important to note that as of late 2019, the majority of the Adam’s trim levels have been cut from the range as production winds down. Just Jam, Energised and Griffin are available from new. 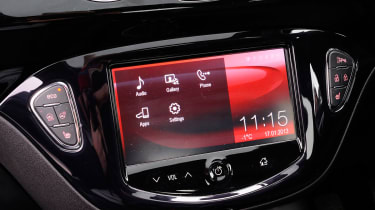 You’ll have to pay extra for the IntelliLink seven-inch touchscreen infotainment system on all models. It’s not the most intuitive set-up, but it lets you upload various music and sat-nav apps, with the sort of swipe functionality you’d find on a smartphone.

Every Adam features a CD stereo with USB connectivity and an aux-in socket, but Glam models upwards get a six-speaker surround sound system with DAB radio. For the best in-car sound, an optional Infinity premium speaker set-up can be added to all versions.