The Adam is fairly ordinary to drive, but the 1.0-litre three-cylinder turbo is a gem

As with the Vauxhall Corsa, quick steering ensures that the Adam feels keen and alert on winding roads. Turn-in is sharp and there’s lots of grip, plus the stiffer suspension in the top-specification Adam S helps reduce body roll. However, push harder and the car starts to lose its composure.

The combination of harsher sports suspension and large 17-inch alloys on the Adam Slam also has a negative impact on ride comfort, because the car thumps into potholes and fidgets over small bumps. With their softer springs and smaller 16-inch rims, the Adam Jam and Glam are much better suited to the UK’s poorly maintained roads. The Adam Rocks and Adam Rocks Air deliver the best ride in the range, with their 15mm increase in ride height meaning longer-travel suspension.

Whichever model you go for, a City steering mode makes the wheel light around town for parking. It then disengages at 30mph-plus to deliver a more natural feel. Combined with the Adam’s small dimensions, it ensures the car is a natural in the urban jungle. Even so, the blend of small rear windows and thick C-pillars means the optional parking sensors are worthwhile.

If fun behind the wheel is your priority, then the performance-biased Adam S will appeal to you most. It uses a 148bhp 1.4-litre turbo engine, sits on a VXR-tuned chassis and borrows the larger brakes from the Corsa VXR. It’s quick for a car of its size and engaging to drive, but the firmer set-up and 18-inch alloys can make it a little rough at slower speeds. 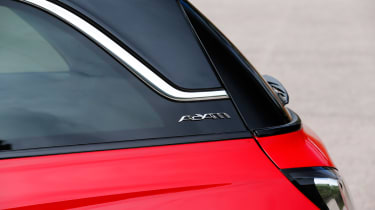 The Adam arrived with a choice of dated engines already seen in the previous-generation Corsa supermini, and these did little to help its appeal. Although they’re largely well proven in terms of reliability, on the performance front they don’t offer enough power and torque to make the most of the Adam’s light chassis.

Following on is the 1.4-litre normally aspirated four-cylinder, which has a choice of 86bhp or 99bhp outputs. Both develop peak power at 6,000rpm and deliver 130Nm of torque at 4,000rpm.

Neither model is quick, but the 99bhp Adam does 0-62mph in 11.5 seconds and goes on to 115mph, ahead of the 86bhp car’s 12.5 seconds and 109mph. Equip the 86bhp engine with the Easytronic auto, and the sprint time slumps to 13.9 seconds, although the box’s longer gearing improves the top speed marginally, to 111mph.

To get the best from any Adam, the engine under the bonnet needs to be turbocharged – and the real star is the 1.0-litre three-cylinder, which again is taken from the Corsa. With 113bhp and 170Nm of torque, it takes the car from 0-62mph in 9.9 seconds and on to a 121mph top speed. But this data doesn’t tell you how sweet, smooth and free-revving this unit really is. It’s one of the best of its type and something for Vauxhall to be really proud of - it's a shame that it was no longer offered in the Adam at the end of its production run.

Engine choices are much more limited in the Adam Rocks and Adam Rocks Air. Buyers’ only options are the 1.2 or 1.4-litre engines without ecoFLEX technology, or the 1.0-litre three-cylinder. The latter is the obvious choice.