Is the supermini top seller just as good a buy used? 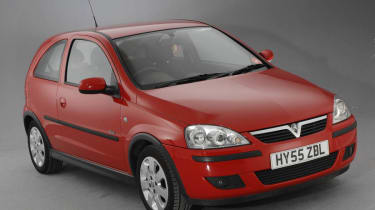 Small on the outside and big on the inside – you will be spoiled for choice if you’re considering a used supermini. Every mainstream manufacturer has one in its line-up, and the Vauxhall Corsa is a very big seller.

The fourth-generation car went on sale last year, so the model it replaces now looks fantastic value. And with a wide engine range, three and five-door bodystyles and an array of trim levels, there’s a variant for every taste. The question is, does the Corsa suit you? And which should you buy?

History The third-generation Corsa arrived in dealers in October 2000, with a selection of 1.0, 1.2, 1.4 and 1.8-litre petrol engines. There was also a 1.7-litre Di diesel, while an intercooled version of the oil-burner wore the DTi badge.

Neither diesel engine was particularly strong, though, and they were replaced by a far better 1.7-litre CDTI common-rail unit. A 1.3 CDTI powerplant joined the line-up as well.

An overhaul in August 2003 saw Club spec replaced by Life, while Elegance became Design. This facelift also introduced revised bumpers and interior trim, although you’ll be hard-pressed to spot the difference.

What to look for Low-mileage Corsas are common, but not all have a clean history. As they are often used as city cars, expect to find parking scrapes, plus premature clutch and brake wear.

Don’t pay less for a three-door if you need to strap kids in the back; the extra you’ll shell out for a five-door is well worth it. And if you’re tempted by an early high-mileage 1.7 Di or DTi diesel, remember that these engines need a fresh cambelt at 100,000 miles – later oil-burners are fitted with chains which don’t need changing. Used Corsas bought from main dealers benefit from the backing of the Network Q approved scheme.

Alternatives There are lots of second-hand options for supermini buyers, with something to suit every budget. We recommend having a look at the Skoda Fabia, because of its low running costs, or the Toyota Yaris, thanks to its combination of economy and reliability.

Alternatively, the Fiat Panda and Hyundai Getz are well worth considering, as both represent excellent value for money second-hand.

However, we still think the Honda Jazz is the best supermini choice on the used market, because of its winning blend of usability, practicality and reliability. Unfortunately, these attributes mean the Jazz is likely to be the most expensive option.

Running costs All third-generation Corsas need servicing every 20,000 miles or 12 months, regardless of the type of engine or its capacity. Taking the first four check-ups in order, typical costs are £120, £200, £120 and £240 respectively. This includes fresh brake fluid where necessary.

Verdict The third-generation Corsa was a big step forward over the car it replaced, and prices are very tempting. While it doesn’t lead the class, it’s good to drive, cheap to run and, as long as you can find one for a reasonable amount, should prove to be a great buy

DECEMBER 2001: Driver and front passenger seat latch springs can weaken and fail to lock the seat.

MARCH 2004: Steering wheel retaining screw may have been tightened incorrectly.

MARCH 2006: Water ingress into the ABS wiring can cause a short circuit and potential fire.

2007 DRIVER POWER: Corsa lived up to expectations for 90 per cent of owners – but low scores show you weren’t expecting much!