It's warm rather than red-hot, but does the Red Edition Corsa pack a punch? 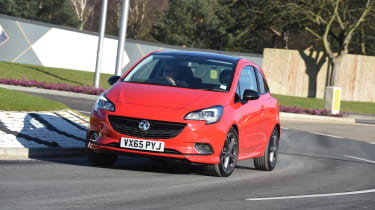 If you require a brisk supermini, but find the Corsa VXR just too stiff and noisy, this Red Edition is a likeable choice. The handling and outright speed won’t set your world alight, but it’s a comfortable, refined and restrained warm hatch. The only fly in the ointment is the price; the Fiesta ST is just £500 more, while a SEAT Ibiza FR is nearly £1,000 less.

In recent years, Vauxhall has gained a reputation for building fast and lairy hot hatchbacks, and the latest Corsa VXR upholds this. But for many, the hard ride, aggressive looks and excessive road noise make it a bit much to live with on rutted UK roads. That’s where the new and unassuming Corsa Red Edition comes in.

Don’t be fooled by the name; this isn’t just another quick paintjob and trim update for dealers to shift. Underneath the racy red skin lies the same 148bhp 1.4-litre turbocharged petrol engine you’ll find in the Vauxhall Adam S. For good measure, the brand has also thrown in a gloss-black roof, black mirror surrounds, a bodykit and new 17-inch alloys. A Black Edition is also available, and there are no prizes for guessing what that model looks like. 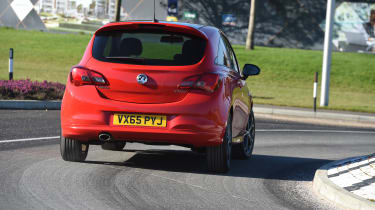 Inside, the Red is broadly the same as the regular three-door Corsa, apart from some red detailing on the dashboard. It’s all fairly robust, and the piano-black panel across the dash helps give the Corsa a more premium feel. It’s a shame that Vauxhall couldn’t stretch to a pair of sportier looking seats, though, as the standard ones aren’t very inspiring to look at or supportive.

On the plus side, space in the back is fine for two adults, while standard kit includes cruise control, a seven-inch touchscreen and GM’s OnStar concierge system, so it’s pretty well equipped, too.

Given how brilliant the EcoBoost turbo petrol is in the Ford Fiesta Red and Black editions, we’re surprised Vauxhall hasn’t beefed up its excellent 113bhp 1.0-litre three-cylinder unit for the Corsa Red. Instead, there’s the 1.4-litre four-cylinder turbo, but it's nearly as smooth and refined. It’s punchier than the figures suggest, too, thanks to a healthy 220Nm of torque. 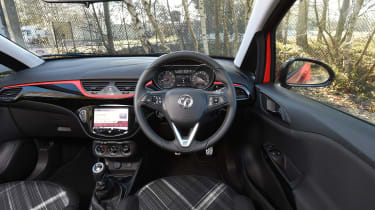 You need to rev it past 3,000rpm to get the best out of it, and performance tails off towards the red line. Keep it in that sweet spot, however, and it feels punchy and sounds sporty but not intrusive. It might not match the claimed economy figures of the Fiesta Ecoboost, but in mixed driving we saw a respectable 38mpg.

Just don’t expect it to attack corners like the VXR. It gets sports suspension and a slightly lower ride height, but there’s still a fair amount of body roll and not an awful lot of front-end grip. The steering is direct and well-weighted, however. Accept that this won't engaqe quite like the Fiesta or a MINI, however, and it's more than acceptable. The trade off is also a welcome one; this is one of the smoothest-riding warm hatches around, and road and wind noise are kept well in check.