With buyers flocking to the BMW 3 Series and Audi A4, Vauxhall has pulled out all the stops for the new Insignia Grand Sport 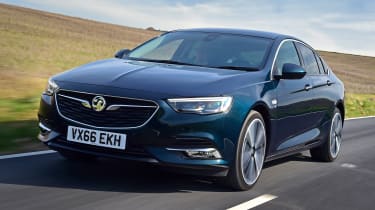 We’d already tried the new Insignia Grand Sport with a downsized petrol engine, but in this part of the market diesel isn’t dead. This 1.6-litre ecoTEC is expected to account for the bulk of new Insignia sales and it’s easy to see why; frugal, good to drive and loaded with kit, the new Grand Sport is also significantly cheaper than the car it replaces. With big savings on whole life costs, it’s an extremely attractive company car choice.

Vauxhall’s history of big saloons stretches back for decades. The outgoing Insignia has been a fleet favourite since it launched in 2008, but with buyers now shying away in favour of premium models like the BMW 3 Series and Audi A4, bosses have thrown ripped up the rule book for its latest company car.

We first drove the new Insignia Grand Sport last month (Issue 1,465), with a new 1.5-litre turbo petrol engine. We came away impressed, but despite industry rumours diesel is dying, Vauxhall expects up to 80 per cent of its D-segment saloons to be powered by the black stuff for some time yet.

So now we’ve had the chance to try the tried and tested 1.6-litre ecoTEC diesel, in popular Design Nav trim to see if the designers, engineers and marketeers have done enough to tempt you out of your luxurious executive express.

We praised the turbo petrol engine for its refined driving manners, well-weighted steering and agile handling – and this diesel is no different. Ok, there’s a little more rattle from beneath the bonnet, but it’s barely noticeable at a cruise. Wind and road noise are kept quiet, too, making this an easy car to drive long distances. 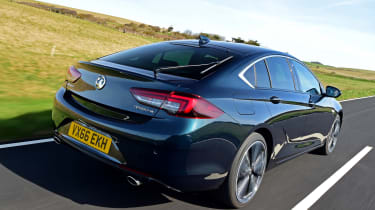 Acceleration is good, and while a 0-62mph time of 10.9 seconds is almost two seconds slower than the petrol (9.3s), its superior torque means it feels just as fast on the road. Quick overtakes are possible, and pulling up a slip road is pain free. The tall sixth gear ensures impressive fuel economy (70.6mpg), but can cause sluggish responses when you plant the throttle at speed.

While CO2 emissions are near enough irrelevant for private buyers, company car drivers will value the low 105g/km figure for our Turbo D test car. Its 23 per cent rating is two points lower than the petrol, but not as competitive as the most frugal Ford Mondeo ECOnetic (20 per cent) or excellent Skoda Superb Greenline (21 per cent). The Vauxhall’s lower list prices should make it cheaper to run, however, with insiders suggesting it could save you as much as £5,691 in whole-life costs over four years.

Like the 1.5 turbo, the diesel’s soft setup is great around town, swallowing lumps and bumps without fuss. It feels suitably composed on the open road, too. Cars with the optional adaptive dampers limit body lean better, but even on the Insignia’s standard setup it’s no chore to hustle along fast sweeping B-roads. 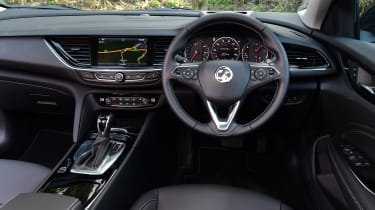 Our Design Nav car was identically equipped to the petrol car we tried last month, offering loads of kit for less than £20,000. While alloy wheels are optional, Vauxhall’s clever ‘structure’ wheel trims offer replaceable plastic that’s indistinguishable from a metal rim. Inside, you get an eight-inch touchscreen with sat-nav, Apple CarPlay and Android Auto, as well as a Wi-Fi connection, DAB radio and cruise control. In fact, there’s enough equipment here to prevent you paying more for the sportier SRi or flashier Elite-spec cars – though flagship models do get slightly plusher materials on the doors and dashboard.

But there’s very little to complain about from the front seats. Everything falls neatly to hand, and with a lower roofline and lower hip point, the driving position is more comfortable and offers greater engagement. Useful touches like the small ledge below the screen to steady your hand while prodding the screen make it easier to live with day-to-day, while the decent 490-litre boot should be big enough for most needs. A Skoda Superb is bigger, however.