Practicality, versatility and value for money. These are the cornerstones of the MPV market, and the virtues that have made the Zafira 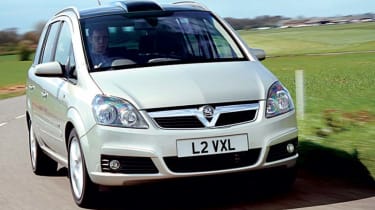 The new Zafira addresses most of its predecessor's weaknesses and builds on its strengths. But while the Flex7 system is still class-leading, separate middle seats would have been a welcome improvement. All the cabin trim is upgraded, and there is a good choice of engines. The only real question mark hangs over the price, with the overhead lockers pushing the cost above that of rivals.

Practicality, versatility and value for money. These are the cornerstones of the MPV market, and the virtues that have made the Zafira a big hit with family car buyers since its launch in 1999. Vauxhall is hoping for more of the same from its all-new people carrier, but can the fresh machine bring the compact-MPV spotlight back on to the Zafira?

The previous version's key attraction was its Flex7 seating system, and that's the case again. A lesson in simplicity, Flex7 is still the model for other manufacturers to follow. You simply slide the middle bench forward and pull the back chairs out of the floor. In the new car, these are slightly more bolstered than before, and have been set a bit higher to improve comfort. The legroom still is not generous, but two adults can just about manage in the rearmost seats for a short journey.

Our only real criticism of Flex7 is the one-piece middle bench. We understand why Vauxhall was reluctant to tamper with a winning formula, but adding a split bench would have made the system even more versatile. At least the backs still fold and you can flip the base up like a cinema seat - handy for stowing smaller items.

The advantage of Flex7 is that you never need to haul chairs out and leave them at home. With all seven seats up, luggage space is still tight, but in five-passenger mode it is much more impressive. Vauxhall has also introduced the £50 FlexOrganiser system, which consists of a couple of rails on either side of the boot walls. Netting can be attached to hold things in place or slide luggage hooks up and down. The idea is borrowed from the Vectra Estate, but the system does not feel as well made.

The same cannot be said of the rest of the interior. While the Zafira is still somewhat grey inside, much like the Astra that the MPV is based on, it feels much more durable than its Renault Grand Scenic competitor, and has a very clean dashboard layout.

The French car has the advantage in terms of stowage space, though. The Zafira's dash-mounted gearlever frees up an area around the horseshoe-shaped handbrake, but otherwise the cabin lacks cubbies. Buyers can opt for a panoramic glass sunroof, which includes some clever overhead drop-down boxes, yet this is an expensive extra at £850.

If this was a standard fitting, the Zafira would match the Grand Scenic's practicality, but as it is the Vauxhall falls just behind. It cannot be faulted for its chassis, though. As with the Astra, the Zafira has a decent ride quality on standard wheels, and feels taut and controlled when cornering. It handles better than its predecessor and many of its class rivals, too.

The 148bhp diesel engine fitted to our test car provides ample in-gear punch and is very refined, while the slick and precise box is a big step forward. A range of powerplants sourced from the Astra line-up means customers have plenty of choice.

With improvements in every area, the Zafira fulfils the compact-MPV brief with ease. However, it will have to please a particularly demanding group of new car buyers. More memorable styling would help, but we reckon the Vauxhall will fight its corner well and looks set to follow the success of its predecessor.