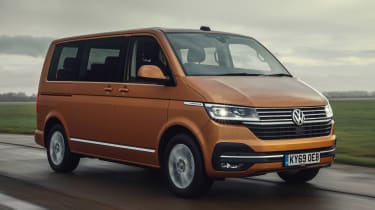 There’s very little to choose between the two engines in terms of economy and emissions. The TDI 150 unit produces 166g/km of CO2 in Executive trim while the TDI 199 only pumps out 168g/km in equivalent spec. On the WLTP combined cycle, the official numbers are between 31.7 and 33.6mpg for the TDI 150 and between 31.7 and 34.0mpg for the TDI 199, all of which makes the extra thrust of the flagship engine more attractive.

Both of the VW Caravelle’s engines are compliant with the Euro 6d emissions regulations and use SCR (Selective Catalytic Reduction) technology to clean their exhaust emissions with injections of AdBlue from a 13-litre onboard tank. The Diesel Particulate Filter (DPF) also has a novel feature that will be of use to Caravelle buyers spending most of their time in urban areas. At speeds below 25mph the automatic cleansing of the DPF doesn't kick in but an optional button in the cabin lets the driver manually engage the cleaning function to burn off the collected soot particles - just check your mirrors first. 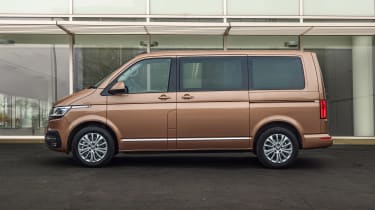 Insurance groups for the Caravelle kick off at 24E for the short wheelbase TDI 150 variant in SE trim. You’ll step up to 25E for the long wheelbase model while the BiTDI 199 variant sits in group 31E or as high as 33E for the top spec Executive model. By way of comparison, the Mercedes V-Class sits a little higher in groups 37 to 46 for the 236bhp flagship models.

The Volkswagen Caravelle holds its value extremely well and the strong residuals will go a long way towards offsetting the somewhat steep list prices for the vehicle.