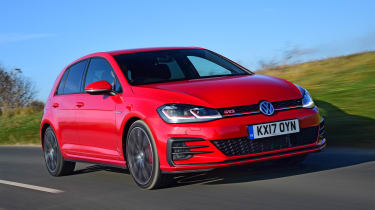 The additions on the Volkswagen Golf GTI Performance add even more ability on a twisting road without any compromise compared to the standard car. However, the DSG isn’t as involving or as fun as the manual model, so we’d save the £1,170 premium here. Otherwise, the greater traction from the Performance’s clever diff makes the most of the extra power, while the big brakes complete the package. It’s a GTI that continues to live up to the legend.

After more than 40 years on sale the Volkswagen Golf GTI has rightly earned its status as a performance icon. It carved out a niche for itself in the hot hatchback segment, offering performance, practicality, image and affordability in a slick and economical package.

This facelifted Mk7.5 GTI Performance model fitted with VW’s seven-speed DSG dual-clutch automatic gearbox promises to deliver all of that for maximum performance potential. If you want a hot Golf but don’t fancy the four-wheel drive R, this could be the car for you.

So what do you get for the £31,505 this five-door hatch costs? Well, over and above the standard GTI there’s a power hike to 242bhp from the 2.0-litre four-cylinder turbo engine, bigger brakes and a clever VAQ limited-slip front differential that helps put that extra power to the road. 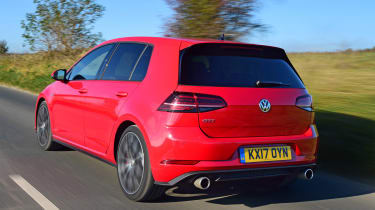 Traction is strong for a front-wheel-drive performance car with this level of power. Admittedly, the GTI Performance still scrabbles for grip a little off the line, but with launch control as part of the DSG transmission, the 0-62mph sprint is dealt with in 6.2 seconds.

That locking diff helps through corners. Trim your speed on the way in, apply the power smoothly and the nose locks on to a line, working with the accurate, nicely weighted steering and taut chassis to deliver an impressive level of agility for a family hatch.

The engine has plenty of punch in the mid-range to make the most of that traction, but it’s also linear and doesn’t run out of puff towards the redline like some turbo engines do. There’s a suitable soundtrack in the sportier of the driving modes when you rev it out, too. 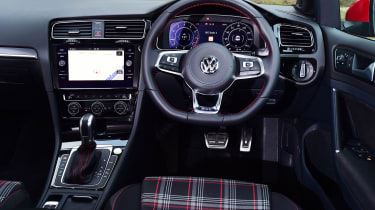 You’ll be thankful of those upgraded brakes to tame that extra straight-line performance when you approach the next bend. Lean on them hard and the GTI slows with stability and feels solid on the road.

This is replicated by the build quality inside, as the cabin is constructed from plush materials and gets lots of tech, with the eight-inch touchscreen infotainment system featuring sat-nav and Bluetooth, as well as Apple CarPlay and Android Auto. It’s teamed with a 12.3-inch digital display in front of the driver here, too.

Our test car was also fitted with the £830 Dynamic Chassis Control adaptive dampers, which give a welcome level of compliance in Comfort mode. However, sitting on larger £990 19-inch alloys you still feel wheel movements over lumpy surfaces, even if these impacts are nicely rounded off. Ramping things up to Sport heightens these characteristics, but makes the GTI feel sharper and more alert, with less roll in fast direction changes. 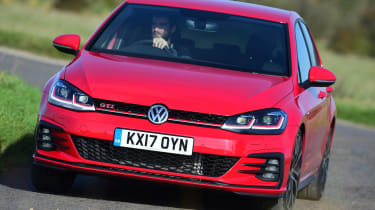 There are some downsides to this package, though. There’s not much feel through the steering, even if the grip on offer is more than you’ll need in most occasions.

The seven-speed DSG (the standard automatic GTI uses a six-speed DSG) isn’t as snappy as we’d like either, slurring shifts a little even in Sport mode. It’s smooth and effortless in Comfort, but it doesn’t have quite the snap or response to manual changes we were hoping for.

However, it’ll take more than this to take the shine of an otherwise accomplished package. With a roomy cabin and a 380-litre boot, claimed efficiency of 44.8mpg and 144g/km CO2, it has practicality and usability to go with the pace and performance.

It delivers exactly what a GTI should – but so does the standard five-door manual-equipped car for £2,530 less.