We get a short drive in two next-generation VW Golf hybrids, which will improve performance and lower emissions 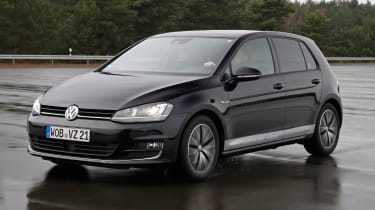 Volkswagen is gearing up to introduce 48v mild hybrid technology on its wide-ranging line-up of cars - and Auto Express has been deep inside the company’s test facility in Germany to try it out.

The systems are expected to be offered first on the next generation of the Golf, due by 2019. There are two levels; the first VW calls MHEV (Mild Hybrid Electric Vehicle), which has a 48v-powered belt-driven starter-generator. MHEVplus is the other, which adds an electric motor producing around 25kW (34bhp) and a lithium-ion battery pack.

The combustion engine in both cases is the VW Group’s 148bhp 1.5-litre turbocharged petrol unit, as seen in the current Golf. The transmission is the firm’s latest DQ381 seven-speed DSG, which has been engineered to be compatible with the forthcoming hybrid systems. 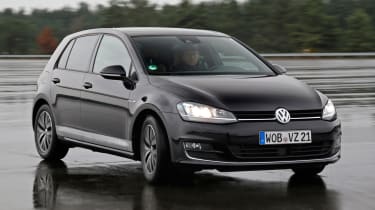 VW laid out a simple course at its Ehra-Lessein facility for us to sample the tech in prototypes based on the current Golf. The MHEV feels reassuringly simple and progressive to drive; there’s the smallest amount of electric whoosh as you pull away, just for a fraction of a second, as the 8kW starter-generator helps to get the wheels moving. Thereafter, it feels much like any other petrol Golf. VW estimates a potential gain of at least 7mpg in normal driving.

The more complex MHEVplus set-up has greater potential for a number of reasons. Its electric motor can recuperate energy when braking without needing the petrol engine to be switched on, and it can drive the car on electricity alone. Not for the same distance as a plug-in hybrid like the current Golf GTE, granted, but during slow-speed manoeuvres, such as crawling in traffic or parking.

This system is clearly further from sign-off, though, and considerably more complicated. VW’s engineers admit they need to work hard on “mixing the torque” of the 25kW electric motor with the 1.5-litre engine’s contribution. And while the system is far from poor, there’s a noticeable series of transfers in the powertrain, as it mixes the ratio of electric to petrol power. 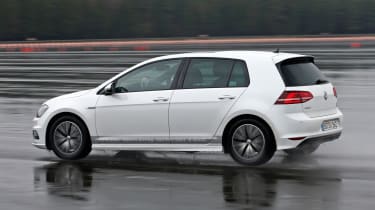 This version does feel a little bit heavier than the Golf with the simpler MHEV system, too, and you’re definitely aware that there’s more going on beneath you. However, the power delivery is smoother and more evidently beneficial when parking up in silence at the end of the test drive. These are precisely the sort of parameters where the engineers believe it should work best.

VW reckons that the MHEVplus technology could be used to power the rear wheels in slippery conditions, in a relatively simple all-wheel drive configuration. Engineers demonstrated this in a Tiguan stuck in sand and on a slippy gravel slope - and in both cases the 25kW electric motor was able to drive the rear wheels and get the vehicle moving again. The system could also bring benefits on the road, because it kicks in power at the rear wheels if it feels the front wheels are breaking traction.

The mild hybrid systems, which will come in addition to the latest Mk7.5 Golf micro-hybrid that can deactivate the engine completely when you’re cruising along, are part of VW’s ‘toolkit’ of new technologies designed to help the firm to meet targets on CO2 emissions. 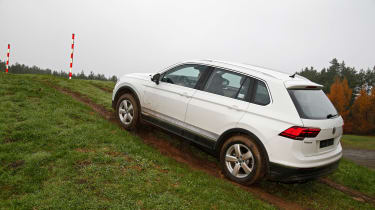 The newly introduced 129bhp version of the 1.5 TSI in the Golf uses a Miller cycle configuration and a variable turbine geometry turbocharger (as taken from VW’s diesel motors) to deliver a high compression ratio. VW claims the unit offers improved fuel efficiency with reduced knocking, and that customers should notice better real-world economy and quicker throttle response.

It estimates that 25 per cent of its cars will be either plug-in hybrid or fully electric by 2025 – a startling rise from their current VW global sales share of three per cent. However, the company also says that the 48v-powered systems will help to fill a large gap in efficiency between ‘fully electrified’ powertrains and 12v micro-hybrids and conventional petrol engines.

Engineers have developed a more powerful version of the same motor, with 158bhp, and are looking to both downsize the technology and upscale it to 2.0-litre engines in future.