The Volkswagen Golf R Performance Pack carries a £2,300 premium over the standard R. Is it worth the extra money? 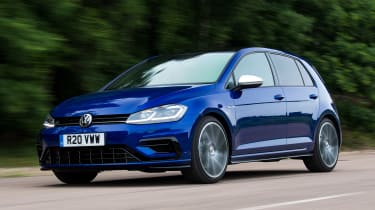 The Volkswagen Golf R remains an astonishingly fast and capable hot hatch, and one with the practicality and everyday usability to match. However, the £2,300 Performance Pack and other pricey options don’t add enough to the driving experience to justify their place on our wish list.

The ultimate version of the Volkswagen Golf has been upgraded with the addition of a new Performance Pack option, which adds £2,300 to the price of the flagship R hot hatch.

It’s a familiar name, as the Performance Pack is already a key option on the Golf GTI. On that car, the upgraded car gets a useful power boost and a limited-slip differential, adding an extra dimension to the GTI’s ability on the road.

• Best hot hatchbacks on the market

That’s not quite the case with the R, however. The pack boasts new 19-inch alloy wheels with wider tyres, bigger brakes and a new spoiler that adds extra downforce. The pack also removes the Golf’s top speed limiter, so it can keep accelerating to 166mph. 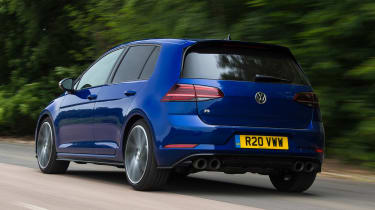 That’s obviously not relevant on UK roads, and while the other additions mean that a Golf R with the Performance Pack is fundamentally more capable than one without, it’s not often that you’ll notice much difference.

The bigger brakes are the most welcome upgrade, as they deliver fantastic stopping power. That’s useful when you’re driving a car as quick as a Golf R: with 306bhp, it’s still one of the most potent hot hatchbacks on sale.

The Performance Pack is only available on Golf Rs with a DSG gearbox fitted. That’s a shame, as the manual version is more involving to drive, but there’s no question that the dual-clutch box offers faster shifts. It’s smooth enough to be comfortable in every day traffic, too.

Another option that’s new, and that was fitted to our test car, is the Akrapovič titanium sports exhaust. This costs another £2,975, but to some it will be worth it. With the automated valves fully open, the system sounds brutal and adds a touch of character to the otherwise dull engine under the bonnet of the Golf R.

The most important option to go for remains the Dynamic Chassis Control (DCC), however, which costs just £850. This allows you to change the suspension settings between Eco, Normal and Race modes. In Normal it’s firm but compliant, while in Race mode it's still able to deal with harsh bumps without upsetting the chassis. In any setting, however, the Golf R feels utterly planted to the road without being so harsh it’s uncomfortable. 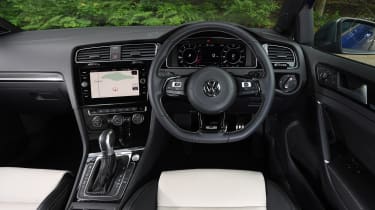 With four-wheel drive traction and loads of grip in corners, the Golf R is able to put its huge performance down in any weather. It’s this fact that will endear it hugely to many drivers, but ultimately, it’s just not as rewarding as a Honda Civic Type R or even a Golf GTI.

It’s only in the finest details of driver involvement that the Golf R falls down, though: it ticks pretty much every box you can think of. It’s fast, practical, reasonably economical, full of the latest tech and comfortable enough to drive every day.

However, we’d stick with the standard R, as the Performance Pack doesn’t represent particularly good value. Better still go for the more-fun and much cheaper GTI.