We drive the all-new Volkswagen Golf GTD, which has 181bhp yet emits only 109g/km of CO2 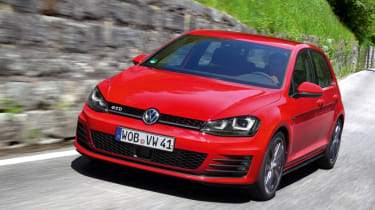 The GTD sets new standards for efficiency and real-world pace. Aggressive looks and a high-class interior make it every bit as desirable as the GTI, but the dynamics never quite reach the same level. The other stumbling block is the price: a SEAT Leon FR with the same engine is a massive £3,565 cheaper – and for us that gap seems a little hard to justify.

The new VW Golf GTD is a perfect example of automotive progress – it’s the quickest diesel Golf ever, yet it’s also capable of 67.3mpg, which is better than the original Golf BlueMotion. But can a car this economical really be a threat to petrol-powered hot hatch rivals?

It certainly holds its own when it comes to style. Everywhere you look there’s a classy detail, and the smoked lights, honeycomb grille and strakes on the bumper add character to the standard Golf’s conservative design. The suspension is 15mm lower than the regular car’s, while the smart 18-inch alloys give the GTD a measured dose of aggression.

Start the engine and it settles into a muted idle. And despite benefiting from a 13bhp power hike over the previous model, the 181bhp GTD is still a second slower than its 217bhp petrol counterpart from 0-62mph, taking 7.5 seconds.

However, with 380Nm of torque from just 1,750rpm (30Nm more that the GTI), the in-gear pace of the GTD is impressive. Grip the golfball gearknob and shift down through the six-speed manual box, and that mid-range clout makes overtaking stress-free.

The car builds speed gradually, rather than providing instant throttle response, but It carries that speed through tight corners with ease.

The chassis stays composed even on bumpy roads, giving you the confidence to drive the GTD hard. Our test car came with the £800 optional Adaptive Chassis Control that has three different settings: Comfort, Normal and Sport. Yet the ride never feels too stiff or brittle.

The new GTD has a quicker steering rack than the standard Golf to provide a more nimble feel. But despite being accurate and well weighted, the set-up doesn’t provide much feedback, and doesn’t feel as tactile as rivals like the BMW 120d hatch.

Our test car also came with a sound actuator that will be available as an option later this year. It uses exhaust sensors and a speaker in the bulkhead to amplify engine noise in the cabin, but adds a synthetic petrol warble that seems bizarre on a diesel.

The GTD comes equipped with tartan cloth seats, stainless steel pedals and a flat-bottomed steering wheel as standard. The finish inside is impeccable, too – this feels like a high-quality product. But then with prices for this manual five-door starting at £25,940 – that’s £380 more than for the old model – so it should.

Tweaks to the exhausts and new variable valve timing mean the engine now meets Euro 6 emissions regulations – but for all its economy, the GTD lacks the sparkle that sets the GTI apart.