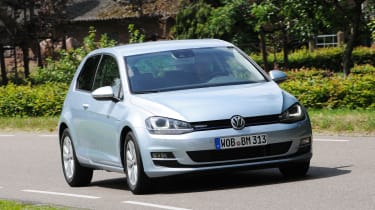 VW’s fastidious approach to engineering efficiency has made the BlueMotion its cleanest Golf yet. But what really impresses about this car – minor gripes about noise aside – is that there’s so little compromise to make between this and the rest of the Golf range, both in the way it looks and drives. The difference is most drivers will only have to fill the tank in this one around 10 times per year.

In June 2013, the 30 millionth VW Golf rolled off the production line. Fittingly, the model in question was one of the latest BlueMotion models that claim to be the most fuel-efficient the company has ever built.

Volkswagen reckons you’ll get an average of 88.3mpg and 85g/km of CO2 emissions, beating the Ford Focus ECOnetic’s 83.1mpg and 88g/km, and trumping the 74.3mpg and 87g/km Toyota claims for the Auris Hybrid.

This latest car is a whole 15 per cent more efficient than the previous generation BlueMotion model, too. And that’s despite the fact that the Mk7 Golf BlueMotion looks like less of an eco model than before. The grille is blanked out and the front bumper tweaked, but VW has done a good job of making the car less obviously different to the rest of the range.

The new model rides 15mm lower than the regular Golf, and its tailgate gets a neatly designed wing which extends down each side of the rear window, cutting aerodynamic drag by 10 per cent.

All BlueMotions are powered by a tweaked version of VW’s new EA288 1.6-litre diesel engine. It has 5bhp more than in regular Golfs, but measures like reducing the engine’s friction, fitting an electric water pump and improving the engine’s heat management combine to improve fuel efficiency. But what that actually translates to is an engine that’s a little on the noisy side, particularly on start-up, and when you pass 2,500rpm.

Although vocal, the diesel does remain smooth across the rev range, and its stop-start system works well. The engine is connected to a six-speed manual gearbox with very long ratios that ensure you keep the revs – and noise – down and efficiency up. It still responds well, though, thanks to 250Nm of torque, and the gearshift has a slick feeling to it, although the lever doesn’t like to be rushed between gears.

The standard Golf is so quiet and refined that the BlueMotion’s engine noise does stand out. There’s extra road noise to contend with, too, as the car is fitted with 55-section Michelin low-rolling-resistance tyres. However, the ride remains very comfortable and supple, and the extra tyre pressure gives the steering an added keenness to respond.

The handling and efficiency also receive a boost as the BlueMotion has shaved 26kg from the running gear and 37kg from the body compared with its predecessor.

Not that you’d know from sitting in the car. The BlueMotion benefits from the same interior as any other Mk7 Golf, with a great driving position and excellent visibility, while the dash feels reassuringly solid. There’s even decent space in the rear, although getting to it is tricky in this three-door.