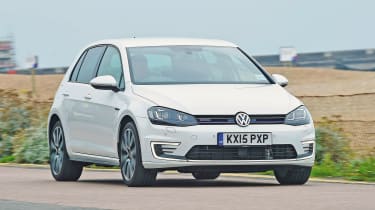 I really did fall for the GTE during its six weeks in my hands, as it fitted in so perfectly with my motoring lifestyle. And the most impressive part of all is how smoothly the electric tech is integrated with the car’s conventional drivetrain. The GTE is expensive, but it works a treat.

If you’re a true car enthusiast, the VW Golf GTE can’t help but be intriguing, even if it isn’t the last word in high- performance hot hatch motoring.

I’ve been running one for the last six weeks now to see if its hybrid personality might fit rather neatly into my life, or turn out to be an overpriced, under-engineered gimmick. And I’ve reached the conclusion that it’s one of the smartest, most relevant hatchbacks money can buy right now.

Yes, the GTE Nav looks expensive at, wince, £35,520 – the standard GTE is £33,755 – but take the £5,000 Government grant into consideration and £30,520 no longer seems quite so painful, especially if you check out how much standard kit the car comes with (adaptive cruise control, air-con and sat-nav with an excellent 5.8-inch touchscreen). 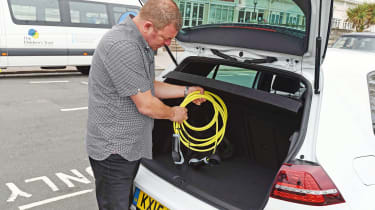 What you’re paying for with this car, though, is its hybrid drivetrain. It features a conventional 148bhp 1.4-litre turbo petrol engine, which is supplemented by a 101bhp electric motor to give a claimed output of 201bhp. Does it work? Yes it does, even if the performance of the GTE fails to truly excite. The car feels smooth and rapid, yet doesn’t knock you for six with its acceleration.

It also feels quite heavy and slightly under-damped if you fling it around like a proper GTI. But use it as a mile-muncher and forget the idea of reaching motoring nirvana on B-roads, and the GTE works brilliantly.

The refined six-speed twin-clutch transmission makes the VW an incredibly relaxing car to drive, thanks in no small part to the adaptive cruise. On one occasion when the roads were particularly quiet, I drove from Aston Martin’s HQ in Warwickshire to my place in Hove on the East Sussex coast without having to touch the pedals once.

On journeys home of 100 miles or more, I found I could generate enough range by recharging on the move to drive the car in full E mode everywhere back in Hove. That much is curiously impressive, not to say convenient given that my lifestyle tends to involve either long motorway hauls or short town trips, and not an awful lot in between. 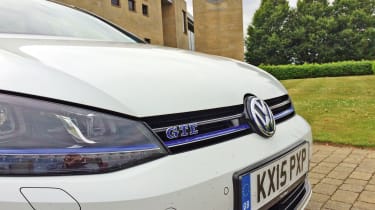 There are four charging points in my home town, all in prime parking locations. Local company Elektromotive runs a free scheme that enables anyone with an electric car to charge up at the points for nothing. Even so, most of them remain available a lot of the time, so it’s not exactly a trend to drive electric there just yet.

A full charge took four hours at a regular power point – two from a wall charger – but I found that even just 45 minutes at an Elektromotive point would put around 10 miles in the tank, which is enough to get back on to the open road and recharge.

The fuel consumption wasn’t too great while recharging, however – less than 40mpg even with a fairly light foot – while in GTE mode, it would do about 42mpg. VW claims the total range is over 30 miles, but in nearly 1,500 miles of motoring, I never saw more than 25 on the range indicator.

Flat out in E mode, the GTE would hit 80mph at our proving grounds, which is spooky when there’s no noise other than that generated by the wind and the tyres.

Inside, the GTE is pure Golf, meaning it’s one of the most well thought out hatchbacks around, with bags of space in the rear, plus a great pair of seats up front and a fine driving position.