We blast off in ultimate version of coupe – and bring it together with its legendary predecessor. 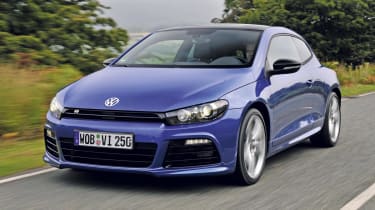 While the regular 197bhp model is no slouch, the new Scirocco R is in a different league. There’s a harder edge to its handling and sound – more so than the Audi S3 – but it’s civilised, too. The styling changes have transformed what was already a head-turner into a traffic-stopper – only the high price stops it from getting a five-star rating.   The storming Scirocco R is hugely talented and oozes desirability, and whets our appetite for the even more powerful all-wheel-drive Golf R that’s on the way.

Batten down the hatches – the most powerful Scirocco yet has blownin! Squeezing 261bhp from its 2.0-turbocharged engine, the coupé hasearned the R badge, denoting the most extreme models in VW’s range. Itfirst appeared alongside the class-winning GT24 competition cars at theNürburgring 24 Hours race in May. But will it enjoy similar success? Wetook a test drive in the newcomer together with its legendary forebear to find out.

The R shares the standard Scirocco’s bodyshell, but it has to bediverted early in the production process to a separate line. All themodifications are courtesy of Volkswagen Individual – an arm of the firm tasked exclusively with preparing R cars.

And the attention to detail is instantly obvious. While the regular coupé is no shrinking violet, the Rising Bluepaintjob and muscle-bound bodykit ensure that the R looks lower, widerand meaner. Rubbing strips have been removed from the doors for asmoother profile, LED running lights give the aggressive front morepresence and the larger roof spoiler and wide-set twin exhausts – an Rtrademark – leave onlookers in no doubt about its potential.

Climb inside and you sink low into the sculpted sports seats. Theinterior is a masterclass in build quality and understated elegance.Every surface is good to touch, from the abrasive aluminium pedals tothe soft leather on the dash. Where the standard model gets chrome orbrushed metal inserts, the R has high-gloss black, for a more sinistercharacter.

It’s the engine that steals the show, though. The 2.0-litrefour-cylinder turbo is a development of the Golf GTI’s unit, but poweris increased to 261bhp – thanks to uprated pistons, high-pressureinjectors and a bigger turbo and intercooler. All that grunt ischannelled through the front wheels via a six-speed manual box asstandard, but our car came with the six-speed twin-clutch DSG – a£1,300 option.

Floor the throttle and the surge of acceleration is instantaneous, withthe front wheels digging hard into the tarmac. The exhaust note has aharder edge than Audi’s S3 – which also uses this turbo engine – andthere’s a wonderful rasp from the tailpipes whenever the DSG changesratios on full throttle.

>>WATCH THE SCRIROCCO R BATTLE WITH THE GOLF R HERE

As the centre of gravity is lower and the track wider than the Golf’s,the model corners fast and flat, with only the merest hint of torquesteer on rutted surfaces. As with all Sciroccos, Adaptive Chassis Control (ACC)comes as standard, allowing drivers to adjust the dampers, steeringweight and throttle response at the touch of a button.

There are Comfort, Normal and Sport modes. The middle setting covers most conditions, the softest mode is best for motorways and Sport is sufficiently stiff for track day fun. It’s just a shame you can’t have Normal steering feel with the firmest damper settings – the wheel is unnecessarily heavy in Sport.

Some might fear the R will be too stiff for daily use, but it rideswell. While it’s always firm, road imperfections are smoothed out. Aset of unique 18-inch five-spoke alloys is standard, with bigger19-inch rims a £515 option. We tried both, and while the latter makefor a harsher ride, it’s bearable. With the R, VW has finally given the Scirocco the performance it always deserved and upped its visual impact – without compromising its usability.

Predecessor: MkI Scirocco Storm Faster and more luxurious than any Scirocco before it, the Storm blew VW fans away when it was introduced in the UK in 1979. It was powered by a 110bhp 1.6-litre engine from the GLi version, and featured leather sports seats and carpets. That made it the ultimate version of the MkI coupé – and the new Scirocco R will be its spiritual successor. Auto Express drove a perfectly preserved example of the Storm, and we were amazed at how powerful the 110bhp unit feels in such a light machine. A 0-60mph time of 8.8 seconds proves headline power figures aren’t everything. Slippery seats, skinny tyres and woeful brakes meant we reached its limits easily, but this shows how far modern cars have come – and what an achievement the Scirocco R is.