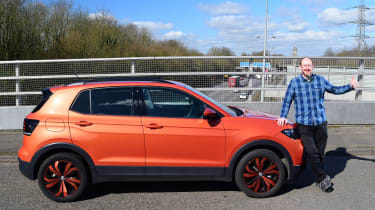 We've had the T-Cross for three months now, and it’s a sign of the car’s quality that it’s been able to slip into our life without us really noticing. It’s a little car with a big-car feel.

Life with the Auto Express Volkswagen T-Cross has been a series of surprises. Pleasant surprises, I’m glad to say.

For example, when I was a lad, back in the last century, there was a simple rule: small cars did short trips, big cars did long trips. So when my family and I were faced with a weekend away in Cambridge, it’s fair to say that we approached the 200-mile round trip in VW’s smallest SUV with a degree of trepidation. Especially as it was going to coincide with Storm Dennis’s visit to the UK.

As it turned out, though, we needn’t have worried. The T-Cross is a pretty small car – only 136mm longer than a Polo – but it feels like a much larger vehicle when on the move.

In fact, the near-100-mile trip to Cambridge from our home in South West London was completed in a very comfortable two hours. And we were only forced to come face to face with the weather once, appropriately enough when nature called, forcing a loo stop at South Mimms services.

For the rest of the time, we were sitting in a pleasantly air-conditioned cabin, with Apple CarPlay providing our choice of soundtrack. Admittedly, a couple of the strongest gusts of wind did knock the car off line a little, but given that it was nearly strong enough to knock us off our feet, it’s to the VW’s credit that it was only a couple of times.

Generally, the only way we could tell how grim the weather was outside was how fast the torrential rain was being blown across the carriageway, and the angle at which the roadside trees were leaning over. Even at the height of the storm, the T-Cross was a haven of calm, and it never felt anything other than totally sure-footed on the road. Big-car features such as the adaptive cruise control took some of the stress out of the drive, and we didn’t even have to turn the stereo up an extra notch to counteract the road noise.

In fact, the storm even helped us. For the entire journey to Cambridge, we had the wind behind us, so the engine didn’t need to work too hard, and the trip was completed at an average of almost 50mpg. 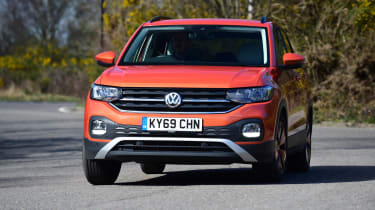 Equally impressive was how well the T-Cross swallowed the many odds and ends we needed for just a weekend away. I was going to Cambridge to play some sport, followed by a posh dinner in one of the colleges, which meant I needed several changes of wardrobe, and so – we expected – would my wife and daughter, who were visiting friends who live in the city.

The car was packed pretty full – with bags, a suit carrier, sports kit and enough games, books and soft toys to keep our daughter happy in our hotel during our one-night stay. But the boot coped well, even with the sliding rear seat pushed as far back as it would go to maximise legroom – and stop our daughter kicking the back of the front passenger seat.

The car itself also coped well with the tight streets of Cambridge. Its high-set driving position gave me a good view, so I could spot the cyclists who come at you from all sides – and often at some speed. And when we reached our friends’ house, the car’s small size (and all-round parking sensors) made light work of squeezing into a tiny space.

Overall, in fact, I’ve been continually surprised at how well this little car fits in wherever it goes. Whether it’s rolling up to the Hilton Hotel in Cambridge, drawing up outside the University Sports Centre or cruising up the A1(M), the T-Cross is in its element. It’s classy, compact and controlled.

Best of all, this is a story that’s been repeated throughout my time with the car. That includes longer trips down to my parents in Sussex, crawls into London for work and more sport, and just doing the general pootling around of everyday life.

In fact, so easily has the T-Cross slipped into my family’s life that perhaps the biggest surprise is that I’m still surprised by it at all. 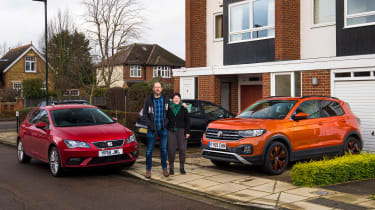 We’ve only been running the Volkswagen T-Cross for a few weeks, but it’s been all good news so far. Any fears that we may have had about moving into a smaller car have proved unfounded.

All my life I’ve taken great pride in doing things a little bit differently, so it came as something of a shock to find myself doing what countless others have done before me: downsizing.

I’m moving from a five-door family hatchback into a smaller, supermini-based SUV. On its way out is the SEAT Leon that has served my family for two years, and in comes our new Volkswagen T-Cross.

It’s not hard to see why we chose VW’s smallest SUV. It was commended in the 2019 Auto Express Awards, looks very smart, and comes with enough safety kit – and a five-star rating from Euro NCAP – to bring a smile to any parent’s face. 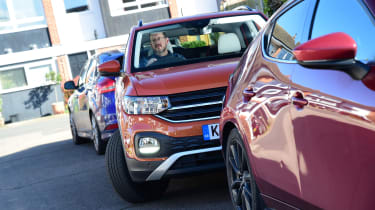 Our car is in what is expected to be the most popular spec in the UK, combining SE trim with the 113bhp 1.0-litre petrol engine. So, we have air-conditioning, all-round electric windows and adaptive cruise control, as well as a decent infotainment system with Apple CarPlay connectivity.

Beyond that standard equipment, our car also has a few options, of which the most obvious are the Energetic Orange metallic paint and Design Pack. This gives us orange alloys and door mirror housings, as well as unique upholstery on the front sports seats, a special inlay on the dash, and tinted rear windows. Plus we uprated the infotainment package to the Discover Navigation system.

This isn’t the first time our family has run an SUV, but we were a little anxious before taking delivery. The T-Cross would be not just the smallest SUV we’ve ever had, it would be the smallest car we’ve had since our daughter was born six years ago.

And it would have a baptism of fire – or the Christmas holiday, as it’s more commonly known. That meant lots of running around before the big day – including a last-minute dash to the supermarket, of course – and a short stay at my parents’ house in Sussex.

Happily, first impressions were all good. The T-Cross’s small size and high driving position made it perfect for getting around South West London. It’s a nice and simple car to manoeuvre and it slips easily through the traffic, while the Energetic Orange paint stood out in the supermarket car park.

The T-Cross made easy work of the schlep down to Sussex, too, riding comfortably on the near-two-hour trip to the coast. Even more importantly, it was nice and refined – quieter than we’d expected of such a small car, in fact – so our daughter slept the whole way on our late-evening return journey.

Admittedly, the T-Cross isn’t the most exciting car to drive. But, in the dreadful weather that accompanied our trip, I was more than happy to trade some engagement for a feeling of safety and security.

And what did the people inside think? Well, my wife and I were very comfortable in the front – the driving position is particularly good – while I really appreciated the easy-to-access Isofix mounts in the rear. 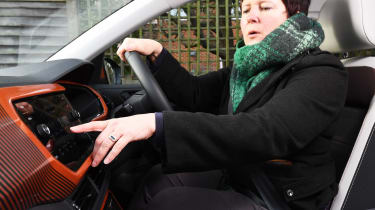 However, one issue we may have as our daughter grows is legroom in the back. We’ve already pushed the VW’s sliding rear seat as far back as it will go, but there are tell-tale muddy footprints all over the back of the front passenger seat.

Similarly, the boot has been big enough for our needs – so far. We didn’t have much luggage for just one night away, and that left more than enough room for all the presents; plus, we’ve found the one angle at which our daughter’s bike will fit in without having to fold down a rear seat. But when we go away for a bit longer, or if we need to upgrade to a bigger bike, the T-Cross could struggle.

For now, though, we’re very happy to be downsizing. And, I may have to admit that following the herd is the right thing to do.