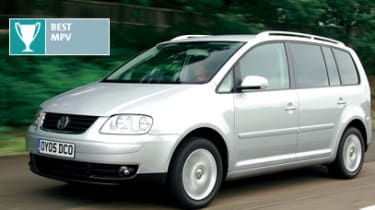 Each one of the models listed in the top five MPV/compact MPV list offers something different from the opposition. Retaining its title from last year, Volkswagen's Touran provides seven-seat practicality with discreet styling. You say there is no better all-round people carrier available in the UK. The second-placed Ford Focus-based C-MAX seats only five, but comes with a more dynamic package at tempting prices. In third spot is Vauxhall's Zafira, which majors on delivering the ultimate in compact-MPV versatility. The firm will be disappointed with its car's 51st place finish overall, although third in class shows the latest Zafira is more than a match for the competition. Fourth position goes to Citroen's Xsara Picasso. It's as old as the hills but, given its unfeasibly cheap prices, we're not surprised when you tell us it delivers fine practicality-per-pound. Due to the relatively low number of MPVs in the top 100, Renault's Scenic/Grand Scenic makes it into the top five here, despite a score that's below the class average.

“I've had a lot of niggles. However, economy is good and it can transport up to seven people with relative ease. It's spacious inside, and feels solid and safe.”

“Perfect for a family with three kids, also possible to take two more friends/family in the back with the seven seats. The car has been bulletproof except for a failure in the electric windows. Size is very big on the inside (not much on the market is bigger) without be too big for town/parking. Performance is good from the 140hp diesel engine and handling is not too bad considering it's an MPV (I've got the sports suspension). We do a lot of European driving and the fuel consumption is very good. Calais to Switzerland on one tank (65lts. Excellent! Overall I would buy another, I just wish they would add the 4motion to the car - maybe the new Cross Touran could have that? The market is screaming out for a car that's 4x4 without being a 4x4 (ie Touran/SMax) type car!”

Justifying its premium prices has always been a problem for VW. Most models in its range challenge for class honours, but if you want a cut-price alternative with similar strengths, you can opt instead for a VW-owned Skoda or SEAT. While the Czech firm's latest models trounce anything from VW in the Driver Power top 100, at least the German giant has trumped SEAT in the manufacturer rank.