Our verdict on the efficient 1.6-litre diesel Volvo V40, which we've driven on UK roads 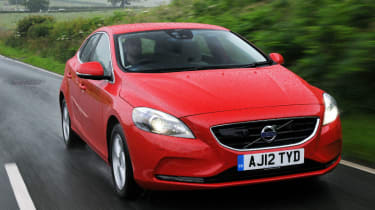 The D2 is definitely the pick of the V40 line-up. If anything, this ultra-efficient model is even better to drive than pricier versions and it looks the part, too. While its not quite as sharp to drive as premium rivals like the BMW 116d ED, it feels just as quick in a straight line and it comes better equipped.

The Volvo V40 arrived in the UK last month, and has since received a series of good reviews. We were very impressed with the powerful D3 model that we drove on the launch, and it should be a worthy rival for the new Audi A3 and Mercedes A-Class.

However, Volvo is pinning its hopes of sales success on this D2 version. It's expected to account for 70 per cent of UK sales, thanks to its tax free emisison of just 94g/km. That remarkable figure makes the V40 the cleanest car in its class, and with its official economy pegged at 78.5mpg, the D2 should be incredibly cheap to run.

Yet, despite its superb efficiency the D2 is just as stylish as the rest of the range. Even the entry-level ES model gets 16-inch wheels as standard and these can be upgraded to larger alloys and tyres without affecting the V40’s tax-free status.

Prices for the range start at £19,745 for the D2 ES, and while that puts it above mainstream rivals like the Ford Focus and VW Golf, the cabin is suitably classy. The welcoming interior feels built to last and the solid switchgear and modern design combine to make the Volvo a very pleasant place to spend time.

The seats are especially comfortable and although realistically there is only room to carry four adults, there was more headroom in the back of this D2 than the first D3 model we tried, as that came without the optional panoramic sunroof.

On the road the grunt available from the 114bhp 1.6-litre engine is surprising. It takes a while to get going but once the full 270Nm of torque arrives at 1,750rpm the V40 pulls very strongly indeed. The ride is a little firm on bumpier roads but if anything the D2 feels lighter and more nimble through corners than the more powerful versions.

Unlike some eco-focused models, the D2 makes no compromises to performance in the search for greater efficiency and even the stop-start system works well. In fact, our only dynamic criticism is reserved for the steering, which is consistently weighted and accurate but provides almost no feedback for the driver.

Still the D2 makes an awful lot of financial sense for company and private buyers and loses none of the V40’s desirability in the process. With its broad range of talents and leftfield appeal, Volvo should easily meet its sales targets.