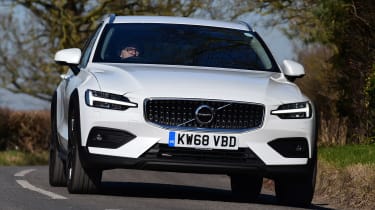 The V60 has already proven itself to be one of the most desirable family cars on sale right now, and this new Cross Country version throws a bit of extra capability into the mix. It has a marginally more supple ride than the regular car, as well as some genuine off-road ability. All of which means that – unsurprisingly – this new model just strengthens this fine car’s basic appeal.

£40,000 is a not insignificant amount of money. And, if you’re lucky enough to have that much to spend, SUVs such as the BMW X3, Alfa Romeo Stelvio, Audi Q5 and Mercedes GLC are all within reach. As is the new Volvo V60 Cross Country.

Cars like this have had it difficult in recent times with the ever-increasing importance and popularity of premium SUVs. However, Cross Country Volvos have always been the best of the breed, and this new version of the V60 comes with one immediate and obvious advantage: the fundamental quality and ability of the car on which it’s based.

While the new V60 is a total revolution over the previous-generation estate, the Cross Country only builds on that. 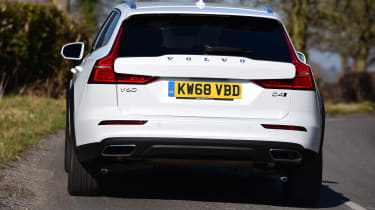 This new model gets a different bodykit to its lower-slung siblings, with a more rugged look created by the use of plenty of hard black plastic cladding. And it rides 60mm higher than a regular V60, thanks to a combination of suspension changes and larger-diameter tyres.

At launch, just one powertrain is available: Volvo’s 187bhp D4 four-cylinder diesel engine, sending power to an all-wheel-drive system through an eight-speed auto box. There’s also an off-road drive mode and hill-descent control, while the more potent T5 petrol engine we tried earlier in 2019 will arrive later this year. 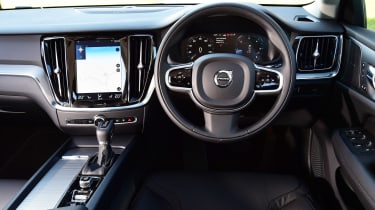 Returning customers certainly won’t be disappointed, given that the usual Cross Country trappings are all present and correct. The car also has a genuine ability to tackle green lanes and muddy trails, and the whole thing is packaged into Volvo’s most convincing car in this class to date. So does this jacked-up estate have the charm and ability to win over prospective SUV buyers? Yes, absolutely – and there are several reasons why.

First and foremost, the 60mm increase in ride height does give a small but just-about-noticeable lift to the driving position. And although the SUVs you can buy for similar money are far loftier, the Cross Country does feel more elevated above the tarmac than the regular V60 estate.

More impressively still, the adjustments to the suspension and the larger tyres also make the ride more comfortable.

Our test car was fitted with 19-inch wheels, but the tyres provide the kind of cushion required to give the V60 Cross Country a solid primary ride. Big holes and bumps are not a problem here. At higher speeds, it’s not as impeccably fluid as your initial impressions might suggest – small amounts of vibration creep in on below-par road surfaces – but it’s still hugely comfortable. 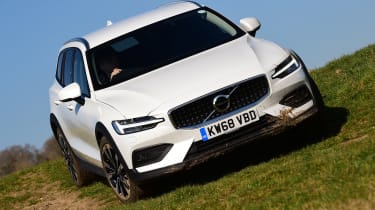 The good news here is that the V60 Cross Country hasn’t sacrificed body control in the name of comfort. Although the steering is pretty lifeless, the newcomer doesn’t wallow and roll too badly in corners.

The D4 powertrain works well in the car, too. It’s decently refined for a diesel unit and the 0-62mph time of 8.2 seconds means adequate performance.

Elsewhere, it’s as you were, and the V60 Cross Country shares many of the strengths of the regular car. The interior is sumptuous and comfortable, using the same high-quality materials, designed around an excellent nine-inch portrait-style infotainment screen. 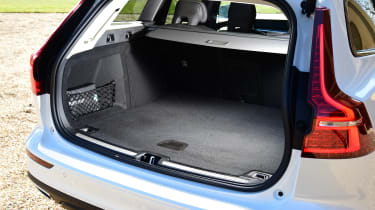 Boot space remains at 529 litres as well, despite the addition of the all-wheel-drive system – which means it’s no less practical than any other V60. The pricing is fairly keen too. And, while the Cross Country is more or less equivalent to the basic Momentum model in the regular V60 range, even that entry-level version is very well equipped. This is is reflected in the level of kit you’ll find on the Cross Country, which brings its own set of strengths on top.

At this price, you’ll struggle to find a similar jacked-up premium estate. The Volvo’s only long-running rival is the Audi A4 Allroad, but with a major facelift of the entire A4 line-up just around the corner, it’s no longer available in the UK. That means any head-to-head comparisons will have to wait until the updated Allroad model arrives – probably in late summer. 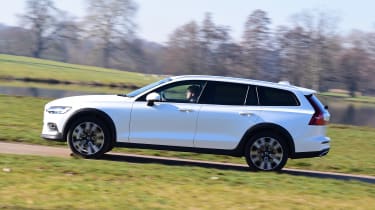 Similarly, Mercedes has no direct rival for the V60 Cross Country, either. While there is an All-Terrain version of the E-Class, the company has so far stubbornly refused to do the same with the C-Class. As a result, the V60 Cross Country is literally in a class of its own for now.