The XC40 enters a class where style and image have traditionally been more important than genuine space. But while the Volvo doesn’t deliver an aircraft hangar’s worth of room in the cabin, it manages to do enough to stand out from the crowd.

The XC40’s interior is neat, functional and, in its own way, very Swedish. If you’re absolutely set on having soft-touch fabrics and squishy plastic on the dashboard then you’ll probably judge it a disappointment, but the rest of us should find the interior a pretty special place to spend time.

The facia has relatively few switches, and a clean, uncluttered look. And depending on the trim you choose, and your bravery with the options list, there’ll be a vibrant flock lining in the enormous door bins to offer a dash of funky colour. The capacity of these door cubbies is huge, in fact - helped by Volvo’s decision to move the speakers out of their traditional area and arrange a sound system based around the top of the dashboard instead.

There are plenty of simple, clever touches, too. You’ll find a folding hook integrated into the glovebox that is designed to help you make it home without spilling a drop of your chicken chow mein. The rather flimsy-looking lidded compartment between the front seats turns out to be a removable, washable bin. And there’s also the option of a wireless phone charging pad and USB port at the base of the centre console. 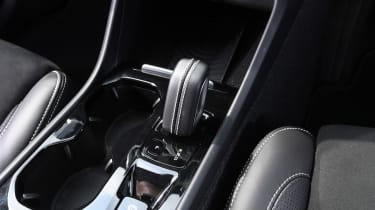 A lengthy wheelbase helps with rear legroom - although the amount of headroom for back-seat passengers is equally impressive, even with the optional panoramic sunroof fitted. There’s plenty of room on board for four grown-ups, although a fifth adult may complain about the high transmission tunnel.

The boot isn’t the largest in the class, but the floor is commendably flat and there are some clever (optional) dividers that help to stop your shopping from rolling around when you’re on the move.

Expect the XC40 to provide a cavernous cabin and you’ll be disappointed. But what the Volvo does do is maximise the potential of what space is on offer.

There’s plenty of space for two adults up front, and you’ll be able to fit a couple of grown-ups in the back seats easily too. The XC40 has a pretty long wheelbase, so they should be fine for legroom - and the amount of headroom for back-seat passengers is equally as impressive, even with the optional panoramic sunroof fitted. 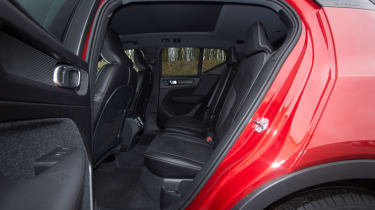 Can you squeeze a third person into the rear seats? Yes, at a push. But there’s a transmission tunnel running down the middle of the floor, so they may complain about having to place their feet at either side of it.

The XC40 doesn’t boast the largest load bay in its class, but it’s easy to use what space is on offer there. That’s because the 460-litre boot has an impressively flat floor, with no lip at the front edge, so it’s easy to slide heavier items in there.

Even more importantly, the floor stays flat even if you lower the rear seats to increase the space on offer to 1,336 litres.

Spec the Convenience Pack and you’ll get a folding boot floor that can divide the space and stop your shopping from rolling around. The hinges even stand proud of the top edge of the resulting divider, giving you a few extra points from which to hang shopping bags.

Customers won't be short of room if they opt for one of the Recharge models, either. These cars include batteries that line the car’s spine, which crucially leaves the standard boot space unaffected. Due to the lack of an internal combustion engine, the Recharge P8 pure electric version also has an extra 30-litre storage bin under the bonnet.