A new platform but some proven engines should help to keep it reliable. Bags of top-notch Volvo safety kit on board, too

The XC40 is built on Volvo’s latest CMA platform - and that means that its underpinnings are, in theory, relatively unproven. However, the Swedish firm has designed the chassis to accommodate its family of four-cylinder and three-cylinder petrol and diesel engines and hybrid motors and battery packs, many of which have seen use in other models before.

This, and the fact that the Volvo gets other components from larger stablemates (such as the infotainment system and some switches) should help it to achieve a pretty decent level of reliability. 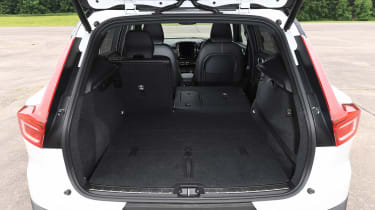 Volvo finished 13th in our 2019 Driver Power owner satisfaction survey, which is a small fall from grace for the brand which finished 7th the previous year. That said, it still finished ahead of Audi, Mercedes and MINI.

Safety continues to be a big priority for Volvo, and the XC40 doesn't disappoint. It scored five stars out of five in the Euro NCAP test, with an impressive 97 per cent for adult occupant protection and 87 per cent for child occupant protection. You get automatic emergency braking across the range – and it’s capable of spotting not only cars but also pedestrians and large animals. Plus every XC40 gets a lane departure system, which will intervene and pull the car back into lane if it senses you’re going to steer into the path of oncoming traffic.

The XC40 comes with a three-year warranty, which is par for the course in the class, although the mileage limit for the cover is 60,000 miles instead of the industry-standard 36,000 miles.

Volvo offers fixed-price service plans for its cars that can be paid for up front or on a monthly basis. These can last from 2-5 years and cover annual mileages yup to 50,000 miles.

As a typical example, you can get 3-years of cover for around £1,000, although this can be added to any finance deal you may take out, which works out at around £30 extra a month on a 3-year finance deal.