Bags of Swedish cool, with a clean, uncluttered design that still manages to incorporate some lovely practical touches

Volvo has deliberately moved the XC40 away from the more luxurious, grown-up presence offered by the larger XC60 and XC90 models - but that doesn’t mean there’s no scope for impressive design touches or the latest technology. Quite the opposite, in fact, because the baby Volvo brings something new to the premium small SUV market.

The car’s styling was inspired by small robots that the British designer, Ian Kettle, saw in science-fiction movies. The end result is lots of simple, clean, resolved lines - and a look that manages to look chunky and cute at the same time. It’s helped by a further evolution of Volvo’s ‘Thor’s Hammer’ headlight motif at the front end. 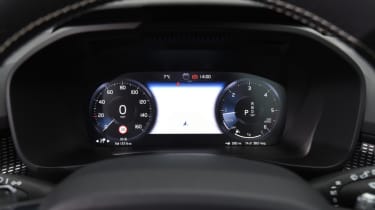 There’s more scope for personalisation than on the XC60 and XC90 too, thanks to contrast roof colours on some versions (black or white, depending on the trim level).

Inside, there’s not much in the way of opulence - and yet the XC40 still manages to deliver a dose of Swedish cool, in the same was a well-resolved IKEA living room display. There’s remarkably little clutter and although the actual amount of space isn’t any greater than the class average, the Volvo’s plethora of neat practical touches makes the XC40 feel a lot more ‘real-world liveable’ than many of its rivals.

Technology helps with this too, of course. And in this respect, a slice of shameless carryover from the XC60 and XC90 works wonders - because the XC40 gets the same nine-inch portrait-layout infotainment display as it larger brothers, as well as a 12.3in digital instrument panel instead of conventional dials. These are standard across the range, too.

All ‘new-era’ Volvos have scored pretty strongly on infotainment - and since the XC40 offers basically the same system as its bigger stablemates, it looks particularly strong for its class.

As with Volvo’s other SUVs, the XC40 gets a nine-inch tablet-style infotainment system mounted in the middle of its dash. The graphics are good and it’s easy to operate, because it works like some of the best tablets on sale, recognising pinch and swipe gestures.

The unit sometimes lags behind your inputs a little and because it’s a touchscreen, it’s not as easy to use on the move as the rotary controllers in Audi and BMW rivals. While acceptable for now, a refresh of the infotainment set-up would be a welcome touch at facelift time.

There are lots of features included, though. You get sat-nav with traffic info, plus you can send a destination to your car using the Volvo On Call with App smartphone function. Neat touches like a USB power point in the rear of the cabin help boost practicality, too, while the 12.3-inch digital dial pack is a cool, hi-tech feature that gives even more functionality. 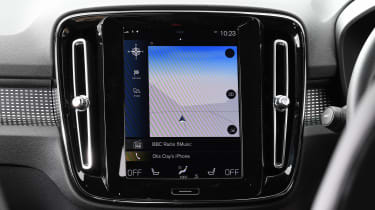 The only fly in the ointment is smartphone integration, because while Android Auto and Apple CarPlay are available, they’re an option costing about £300. That’s pretty stingy when this level of connectivity is standard on many mid-range superminis. And even if you do choose it, it doesn’t make the best of the available screen space, appearing as a letterbox-format ‘window’ instead of using the full portrait layout available.