The new Volvo XC60 T5 is a sophisticated premium SUV, but can it compete with the Jaguar F-Pace? 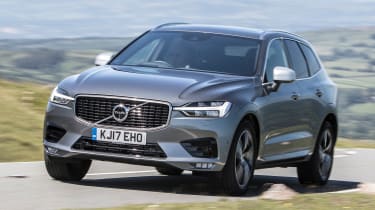 The Volvo XC60 T5 is just as handsome, practical and classy as the rest of the range - and it’s even more refined than the already very quiet diesel versions. It’s not as economical or punchy as those cars, though, and despite the sporty R-Design Pro trim it’s still not as good to drive as a Jaguar F-Pace. The large wheels hurt ride quality too, so we think the XC60 is still at its best in a lower specification with a diesel engine, which suits the car’s relaxed nature much better.

We’ve already been highly impressed by the new Volvo XC60. It manages to take most of what we love from the larger XC90 and cram it into a more affordable, smaller package. We’ve only tried diesel models so far, though, so how does the petrol T5 fare?

There are two petrol models in the range, this four-cylinder turbo T5 and the plug-in hybrid T8 model that has a powerful electric motor on board to supplement its conventional engine. We’ve tested the former in R-Design Pro trim, which is a specification aimed at company car buyers - it comes with several option packs fitted as standard.

You’ll notice the large 21-inch alloy wheels and slatted grille, as well as the bigger exhaust pipes and different bumpers that this high-spec model sports, but this trim also features a ‘sports chassis’ and some sporty-looking interior trim including shift paddles behind the steering wheel. 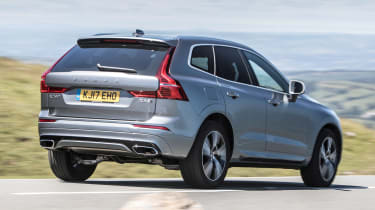 Combined with the petrol engine under the bonnet, which has an impressive 251bhp, the various add-ons mark this car out as the sportiest non-eletrified model in the range, at least until the recently-announced Polestar-tweaked editions arrive.

Unfortunately, that also means the XC60 T5 R-Design Pro is the car that makes the least sense in the range. The XC60 is set-up for comfort and refinement but this version compromises on these strengths in a failed bid to match the likes of Jaguar’s F-Pace for driving pleasure.

The huge 21-inch wheels crash into potholes, and the ride is much busier than models running on smaller 19-inch wheels. On a bumpy B-road it doesn’t even feel as composed as an F-Pace, which deals with British roads better when driving quickly. The XC60 remains very refined and smooths out on the road surface when cruising, although we found it hard to tell the difference between the Comfort and Dynamic modes you can choose from.

It does roll into corners more than the Jag as well, and the steering is too light and vague. There’s lots of grip, and the Volvo is really easy to drive quickly - it’s easily a match for an Audi Q5 on a fast road.

While the four-cylinder turbo engine doesn’t sound particularly exciting, it is very quiet around town - significantly better than the D4 and D5 diesels at low revs. However, it doesn’t feel as powerful as its figures suggest. 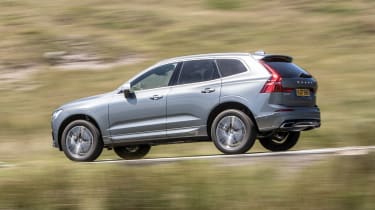 While we’ve no doubt it has the grip and power to complete its claimed 0-60mph time in 6.4 seconds, when you put your foot down to overtake there just isn’t as much in-gear shove as you’d expect from a 251bhp engine. It has 350Nm of torque where the D5 diesel has 480Nm, so the latter actually feels more potent on the road.

The gearbox also feels much more suited to wafting around, as changes via the paddles on the steering wheel are slurred, even when driving quickly. It’s a smooth change, but too slow to compete with sportier rivals. 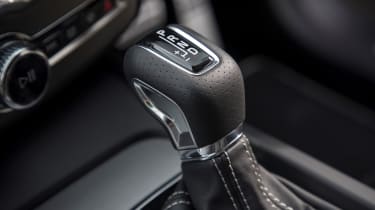 So even though the XC60 T5 seems to be aimed at those looking for a somewhat more driver-focused experience, it doesn’t quite manage it and instead feels a bit compromised. We’d still choose one of the diesel models on smaller wheels, as they show off the XC60’s best side as a relaxed cruiser and improve significantly on the T5’s 38.7mpg economy figure.

The rest of the XC60 T5’s package is as good as its siblings’, with the interior being a real highlight. For us it’s the best in its class: the simple, clean design with top-quality materials and slick infotainment system mean the Volvo feels every bit as upmarket as German rivals such as the Mercedes GLC and Audi Q5.