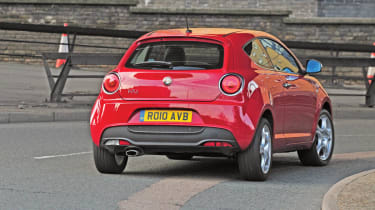 ON first appearance, the MiTo is a very exciting proposition. The styling tends to divide opinion, yet there’s no denying it’s a striking design – and the same can be said of the interior. The new 1.4-litre MultiAir engine gives strong performance and excellent fuel returns, but the rest of the car’s dynamic repertoire is left wanting. The suspension is diabolically firm, while the artificial steering and loose gearchange give the driver few incentives to up the pace.

IS the MiTo as multi-talented as its name suggests? Alfa’s Ford Fiesta rival is known for putting style before substance, but now an advanced new range of MultiAir engines is set to redress the balance.

We’ve already driven the hot 170bhp Cloverleaf variant, but for those who want to trade some of that power for extra economy, a 135bhp version of the same 1.4-litre turbocharged engine is also on sale.

Improvements in efficiency have also been helped by the addition of a stop-start system. Annoyingly, though, the clutch has to be fully depressed before the engine fires back up, which will have you reaching for the button to turn it off.

It might not have quite the punch of the Cloverleaf version, yet the engine is smooth and powerful, with a trademark Alfa growl. But that’s where the dynamic compliments end.

Unlike the Cloverleaf, the suspension is non-adjustable, and its only setting is far too firm. When we first drove this car on Italy’s super-smooth Balocco test track, the problem wasn’t so apparent. But on the UK’s potholed roads, every imperfection is channelled straight into the cabin.

Alfa’s DNA system, which sharpens the throttle and adds artificial weight to the steering, is an impressive piece of kit, yet here it has to be in its most focused ‘Dynamic’ setting to achieve acceptable response from the accelerator. In Normal mode, it’s sluggish and flat.

The gearshift on the six-speed manual gearbox is also at odds with the suspension, feeling slack and vague with a long throw. A six-speed TCT twin- clutch box is available soon.

When it comes to styling though, the MiTo hits its stride. The dramatic design still turns heads, while the interior looks classy. However, barring the excellent new engine, the beauty is only skin deep.