The Alfa Romeo Stelvio Quadrifoglio SUV takes aim at the Porsche Macan Turbo with 503bhp, but what's it like from behind the wheel? 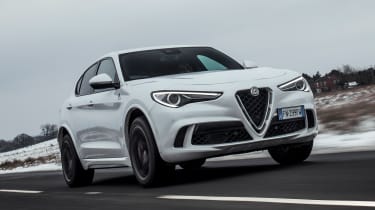 Alfa Romeo has combined the robustness of an SUV with the performance of a supersaloon to create a car that’s fast, exciting and a riot to drive on tight and twisting UK roads. Its high body and big ground clearance occasionally show it up, but the Stevlio Quadrifoglio is one of the most accomplished performance SUVs on the market.

The Alfa Romeo Stevlio Quadrifoglio’s lack of space and practicality, especially for an SUV, has been widely reported. Room for passengers is adequate, boot space is average and you can’t even fit a tow-bar on the back.

However, Alfa’s first performance SUV has many attributes to help you forget about how little it can lug around. Chief amongst them is the 503bhp 2.9-litre twin-turbo V6. It’s the same engine found in the Giulia QV, boasting an identical 599Nm.

Despite being an SUV, with the ride-height and bulk to prove it, the Stelvio Quadrifoglio can sprint from 0-62mph in 3.8 seconds – one tenth faster than its saloon relation. The Stelvio’s four-wheel drive system, and the added traction it delivers, can take credit for that. 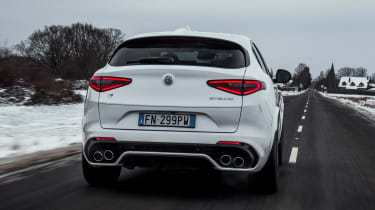 If you’re accustomed with the Giulia Quadrifoglio, the Stelvio’s interior will be a familiar environment. There’s the same part-leather part-carbonfibre part-Alcantara steering wheel, the same black-faced dials with easily legible white digits, the same integrated infotainment screen and the same green and white stitching throughout. It feels solid and well screwed together, but the materials don’t feel quite as luxurious as those in its German rivals.

As well as the engine, the Stevlio uses the same eight-speed ZF automatic gearbox and electronically controlled limited-slip differential as the top-spec Giulia, but despite having a similar drivetrain the SUV feels much brawnier as you manoeuvre it around. It crawls forwards with the intent of an off-roader too, willingly trying climb over any obstacle in front of it.

Accelerate hard, however, and the Stelvio launches forward in a very un-SUV manner. The back squats down and you launch forward with the verve and energy usually only found in the fastest all-wheel drive sports cars.

The engine rips through the revs, reaching its 7,500rpm limiter faster than you expect. With eight closely stacked ratios in play, the revs don’t drop by much with each change, meaning the acceleration is ferocious. It feels absurdly fast, so incongruous that it puts a smile on your face.

On UK roads, the Quadrifoglio isn’t as comfortable as the Giulia or the standard Stelvio; feeling tense even in its softest damper setting. Strangely, switching to Dynamic makes little difference to the ride, despite reducing body roll and pitch. Race mode does induce a vertical bounce when the car hits a bump, however making it feel too stiff on average British roads.

Like the preposterous acceleration, the way the Stelvio can be hustled down a back road is equally hilarious. Driving quickly feels completely natural, in a way no high-riding SUV has any right to be driven. Even on winter tyres it felt sharp and direct; the only hint it wasn’t on more performance-oriented rubber was under hard braking. 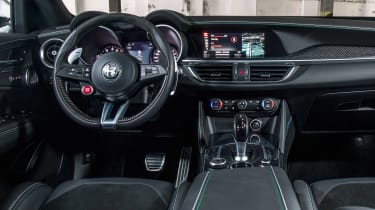 The Stevlio felt most at home when using the ample power and electronic differential to guide it round a corner, the rear-end squatting while you help dictate the angle of the car with the steering and throttle.

There is a hint of oversteer if you unleash the power before the back-end is properly settled, but the Stelvio’s fast steering makes it easy to apply corrective lock in an instant. It makes you feel confident to get on the throttle early, knowing you have the facilities to control the car if it does start to slide.

The Stelvio Quadrifoglio may well have some mind-bending performance figures, but Alfa’s performance SUV isn’t just about covering ground fast, it’s involving, predictable, malleable and, above all, remarkably fun to drive.