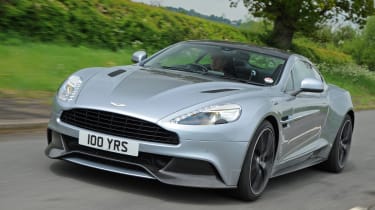 From a purely dynamic point of view, the Vanquish can’t match models such as Ferrari’s F12 Berlinetta, but for many people – and us – that doesn’t matter one bit. It’s a truly lovely thing to drive and look at, and for Aston fans owning a piece of the company’s long history will make the Vanquish Centenary Edition a very compelling proposition.

Aston Martin celebrated its centenary this year with the CC100 Concept, but if you want to actually own a part of the brand’s history you could always snap up a Centenary Edition Vanquish. Only 100 of the £210k specials will be made, and they’re not only exclusive; they’re also even more beautiful than a regular Vanquish.

For starters, there’s a new graduated paint effect, which starts as a light silver on the bonnet but transforms into a dark grey by the time it reaches the windscreen. It then continues over the roof and down the rear panel through the aero duct. Elegance has always been Aston’s forte, and the paint – which takes 18 hours to finish – only serves to enhance this car’s loveliness.

The Centenary Edition also gets solid sterling silver Aston Martin badges front and back. Look closely and you can even see their hallmark, stamped in Birmingham’s jewellery quarter. There are small, solid silver kickplate plaques, too.

As you slide behind the wheel you notice another update: the Vanquish Centenary gets Aston’s sumptuous, deep, soft-leather trim – a special hide which until now adorned only the One-77.

These special tweaks help to explain the price, which puts the new car in a similar bracket to the Ferrari F12 Berlinetta. And compared with the hi-tech Ferrari, the Vanquish feels almost as old as Aston Martin itself – especially when you consider that the Centenary doesn’t get any mechanical tweaks.

But it’s arguably more likeable. Understated but eminently attractive, the Vanquish always garners admiring glances and never a jealous sneer. And while its 4.1-second 0-62mph time doesn’t scramble your brain like the F12’s 3.1-second figure, this feels like the more usable car.

The Vanquish may not feel quite as keyed into the road as some of its rivals, but it’s still sufficiently sharp to engage and entertain even the keenest driver while remaining comfortable at all times – even with the dampers in their sportiest setting. On a motorway cruise the Vanquish doesn’t even suffer from the tyre roar that occasionally blights performance models such as this.

The cabin is wonderful, too. From the quirky square steering wheel to the touch-sensitive buttons which fit flush to the dash, it’s at the cutting edge of in-car tailoring; as with a fine Savile Row suit, it fits you perfectly.

And this beautiful attention to detail sums up the newcomer; the Vanquish Centenary Edition is not only a car, it’s a historically significant piece of art you can drive… at up to 183mph.