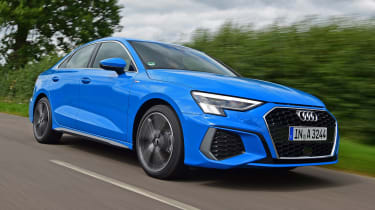 Audi has very much taken the “if it ain’t broke” approach with the new A3 Saloon - so if we owned the previous generation model, we wouldn’t be charging along to our dealership for an upgrade. But minor improvements across the board mean this remains a deeply appealing car, and those who cover high annual mileages will find this 2.0-litre diesel model brilliantly frugal.

This is the new Audi A3 Saloon, though we’d forgive you for needing a nudge to realise as much. The truth is, just as with the five-door Sportback counterpart, buyers couldn’t get enough of Ingolstadt’s Mercedes A-Class Saloon rival, even towards the end of its life, so there was little reason to faff about with a successful formula when the time for a replacement arrived.

That’s not to say Audi has sat back and twiddled its thumbs with the rest of the car though. As with the new hatchbacked A3 that we sampled back in March, this second generation saloon gets a massive increase in tech (both infotainment and safety), improvements in efficiency and refined suspension settings.

But let’s start with that styling. From some angles - the rear in particular - it’s difficult to tell apart old from new. The keen-eyed will notice the quattro-inspired slot above the singleframe front grille, new bumper designs and sharper creases on the bonnet and the car’s flanks. The headlights get a more exaggerated L-shaped kink at their lower edge, too. 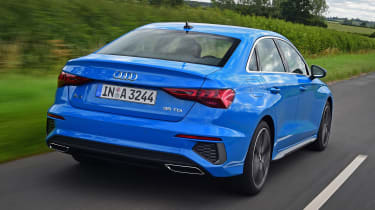 The cabin, however, has been subjected to a complete overhaul. The neat bullet vents and clumsy infotainment display of the old car have gone, replaced by an all-new layout with a driver-focussed feel thanks to small pod-like air vents either side of the steering wheel. The main event, though, is the uprated tech. All A3 models get a 10.1-inch touchscreen as standard, and it looks as gorgeous as it is slick to use. In front of the driver sits Audi’s latest Virtual Cockpit display; customisable dials are shown on a 10-inch screen in base models and a 12.3-incher higher up the range.

Unlike the latest VW Golf, the A3’s cabin hasn’t turned entirely button free. In fact, while the volume dial is no longer a physical knob, the touch wheel (not unlike an original iPod) works well. All of the climate control functions remain on sturdy physical switches.

But not everything feels of such a high quality. For the most part it’s very pleasant inside, but the surrounds of those air vents, for example, feel hard and scratchy. On balance, we reckon the A-Class still feels like a more expensive product.

As before, the A3 rides on the Volkswagen Group MQB platform. Despite subtle changes to the response of the suspension, it feels as before: stable, reassuring and comfortable. Some versions are offered with adaptive dampers, allowing the driver to alter the compromise between sportiness and comfort, but regardless of mode, it’s a completely agreeable - if not particularly involving - way to get around.

At launch, the A3 saloon comes with a choice of two petrol and two diesel engines. The petrol side is represented by a 108bhp 1.0-litre turbo 30 TFSI, plus the 35 TFSI. The bigger number not only gains half a litre in capacity over the 30, but also 40bhp and a 48-volt mild hybrid system; this helps to both save fuel and deploy an extra 50Nm of electrically generated torque.

Two 2.0-litre diesel units are also available: the 114bhp 30 TDI, and the 148bhp 35 TDI driven here. As before, it’s a hard engine to fault: torque delivery is smooth and strong, and even under hard acceleration it remains unobtrusive. 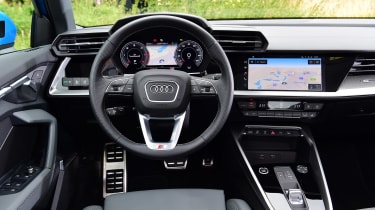 Possibly the most impressive thing about this two-litre diesel unit is its thirst, or rather its lack of it. Officially it’ll do 57.6mpg, and our time with it suggests that’s a completely achievable figure. Busy stop/start town driving returned close to 40mpg, but on long motorway runs it managed low-seventies mpg - a brilliant figure considering the punchy performance on offer.

Both of the 30 models are offered with a new six-speed manual gearbox which helps to boost efficiency over its predecessor. The 35 TDI is seven-speed dual clutch auto only; on the move it feels largely similar to before, but some of the low speed jerkiness which blighted the old car seems to have been tuned out. The 35 TFSI is available with both manual and automatic gearboxes.

The smooth gearbox and excellent MPG returns are among the qualities that make the A3 Saloon a great long distance cruiser. The seats are comfy, the ride settles down at higher speeds, and while road noise levels don’t seem much improved over the old car (it’s fine, in other words), wind noise is very well suppressed.

The lack of wind noise and great mpg figures are thanks in no small part to the introduction of movable air inlets and a smoother underbody; changes which help to trim the coefficient of drag by four points to 0.25. Impressive, yes, but the Mercedes A-Class Saloon still achieves an even more slippery 0.22 rating.

From a practical point of view, the A3 Saloon is near-identical to the last one. That means rear legroom is fine for adults, but headroom is a little tight. The 425-litre boot matches the old car for volume, and is a nominal five litres up on the four-door A-Class. 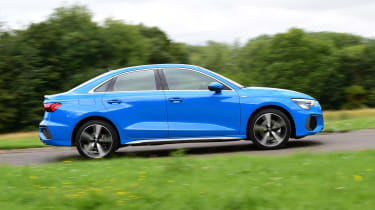 Above this sits the Edition 1 and Vorsprung, each of which are only offered with the larger petrol and diesel options. Both add 19-inch alloy wheels (each with unique styles), Matrix LED headlights, a black exterior styling pack and seat upgrades (Alcantara for the Edition 1, Nappa leather for the Vorsprung). The Vorsprung also gets a Bang & Olufsen sound system and a suite of semi autonomous driver assist systems. Powered by the 2.0-litre diesel of our test car, the Vorsrpung costs £40,570, while the Edition 1 costs £35,470.

If, like many drivers, you choose to go down the finance route, the offers for the A3 are thin on the ground just now. Pay 10 percent up front on the entry level Sport 30 TSI, and you’ll be paying roughly £350 per month over four years, with an optional final payment of £11,339. Stretch to this top spec Vorsprung diesel, and £4,114.50 up front will result in 48 monthly payments of £585.39.