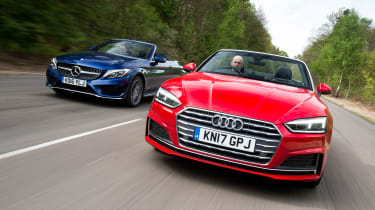 With summer just around the corner, the lure of a classy convertible is stronger than ever. Happily, there has been a glut of new soft-top models recently, and the latest is the Audi A5 Cabriolet.

Based on the handsome Coupe, it promises a desirable mix of wind-in-the-hair thrills, four-seater practicality and unrivalled premium appeal. And with a lower kerbweight and stiffer chassis, the A5 should be as refined and composed on the move as its fixed-head cousin.

However, before Audi can celebrate, the A5 must see off the challenge of the classy Mercedes C-Class Convertible. So which of our contenders breezes off with the win? 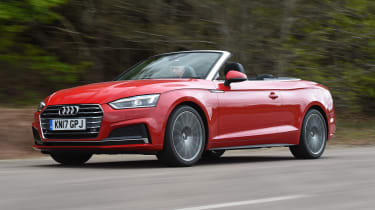 The A5 Cabriolet made its debut in 2007, but after a decade in service it has finally been replaced by an all-new second-generation model. Based on the same scalable MLB platform as the A5 Coupe and A4 saloon, the newcomer is lighter, more efficient and faster than the old car.

The 187bhp 2.0-litre TDI is used throughout the range, and in combination with the seven-speed S tronic auto box and launch control, it allowed the Audi to cover 0-60mph in 8.0 seconds, which was just a tenth down on the four-wheel-drive Mercedes.

The A5 turned the tables during our third, fourth and fifth-gear tests, where it was quicker than its rival. However, extremely tall sixth and seventh ratios meant the car was sluggish from 50-70mph; our test track’s straight wasn’t long enough for the new Audi Cabriolet to record a time in top gear. 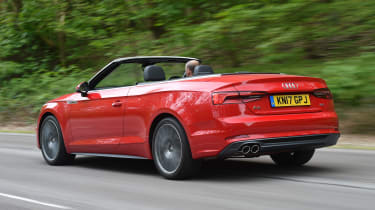 In the real world this means the car is turning 1,500rpm at 70mph and it struggles to settle on a gear when cruising, because the gearbox often kicks down at the slightest touch of the throttle.

Still, at least the gearchanges are swift and slick, while the TDI has the edge here for smoothness.Turn in to a corner and it’s clear the Cabriolet can’t match its Coupe cousin for rigidity. Even so, the stiffer MLB platform means it remains impressively composed over rough surfaces. There’s some shimmy through the chassis, particularly in bumpy bends, but it’s far from  intrusive. Grip is also plentiful, and our car’s  £600 optional adaptive dampers delivered decent body control in their sportiest setting.

In Comfort mode the Audi had the edge for ride comfort as well. Large potholes and ridges sent a shudder through the cabin, but most of the time the new A5 did a good job of soaking up bumps in the surface. 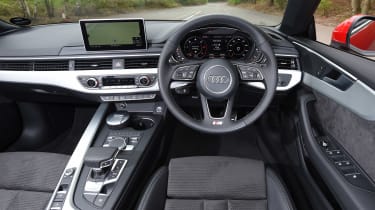 Refinement is also impressive, and with the triple-layer Acoustic hood in place the car was as quiet on the move as the Mercedes.

Lowering the roof requires nothing more than a touch of a button, but it took nearly a second and half longer to stow than the Mercedes’, at 19.9 seconds. Occupants aren’t as well protected from buffeting as they are in the C-Class, either.

The Audi is available with a £600 wind break, but the manually set up unit is fiddly to install and doesn’t allow you to use the rear seats once in place. And while heated front chairs are standard, there’s no option to add a Mercedes-style Airscarf system.

On the plus side, the Audi’s rear bench offers more head and legroom for passengers, while its 380-litre boot is bigger and better shaped. 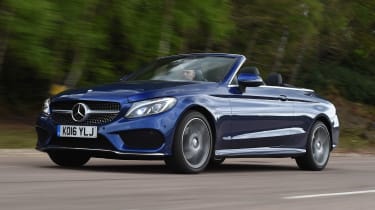 The sleek and stylish Mercedes C-Class is our current favourite upmarket compact convertible. Not only does it look the part, it’s also decent to drive, generously equipped and features a particularly well-integrated fabric roof.

On paper, the C 220 d is at an immediate disadvantage to its rival, with its 168bhp 2.1-litre diesel 19bhp down on power compared with the Audi’s 2.0-litre unit. However, its 400Nm torque figure is a match for the A5’s, and in combination with the closely stacked ratios of its nine-speed gearbox and its four-wheel-drive traction, it allowed the C 220 d to sprint from 0-60mph in 7.9 seconds, which was a tenth faster than the Audi.

The result was equally close during our in-gear tests, where the Mercedes trailed the A5 in the lower ratios, but was slightly quicker in sixth.

In the real world there’s little to separate our duo. While the C-Class’s 2.1-litre diesel can’t match the A5’s 2.0 for smoothness and refinement, the responsive nine-speed auto keeps the engine in the muscular mid-range, so you can make brisk progress without having to extend the four-cylinder. 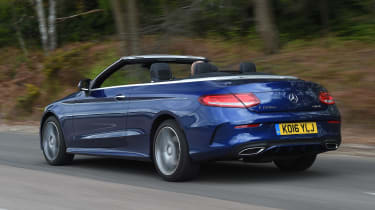 In corners it’s immediately clear the heavier Mercedes isn’t as agile as its rival. The steering is direct and well weighted and there’s plenty of grip, but body movements aren’t as well controlled and it responds to direction changes more lazily.

However, Mercedes has done a good job in strengthening the car’s bodyshell during its transition from coupe to convertible. Severe bumps result in some flex, but the movement is small and doesn’t upset the car’s composure.

This chassis stiffness has further benefits for the ride, which is reasonably smooth at low speed and supple on the motorway. It’s not perfect, though, with sharp ridges sending a sickening crash through the structure.

In other respects, refinement is good. As with the Audi, there’s more wind and noise with the roof up than in the coupe, but it’s far from intrusive. 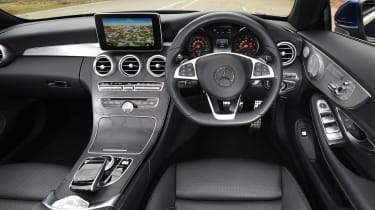 The electric hood is lowered in 18.5 seconds and neatly stowed under a panel behind the rear seats. Yet it’s when on the move that the Mercedes really proves its drop-top credentials.

For starters, it benefits from standard powered wind deflectors – one between the rear headrests and another that rises out of the windscreen header rail. These do an excellent job of cutting turbulence, allowing you to travel four-up in comfort.

Other welcome features include the Airscarf system, which blows warm air on the neck of the driver and passenger, plus heated seats. 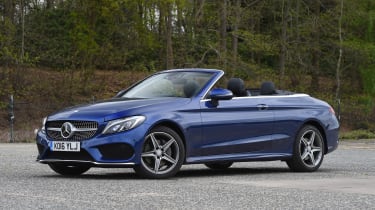 When cruising four-up with the top down, the C-Class excels. It’s not as sharp to drive as its rival here, but it’s a better convertible and packed with handy features to make life more comfortable. Go for the well-equipped Sport in two-wheel-drive guise, and the price gap to the Audi narrows. 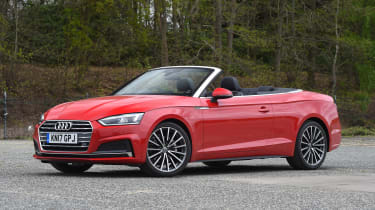 The A5 Cabriolet is a handsome, composed and refined four-seater convertible. It also offers decent practicality, is more attractively priced and will cost business users less. Yet it lacks the neat touches that make the Mercedes easier to live with when the  roof is down, plus it has weaker residuals.