The new Audi A6 Avant estate has arrived to take on the BMW 5 Series Touring, Volvo V90 and Mercedes E-Class Estate 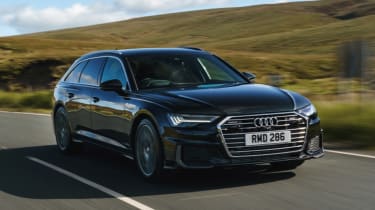 The Audi A6 Avant has always been one of our favourite mid-sized estate cars thanks to its classy image, quality interior and decent load-lugging ability, but the outgoing car started to look distinctly elderly compared to newer models from BMW, Mercedes and Volvo. The new A6 Avant rectifies that though. It’s still a classy looking car – prettier, you could say – and has the same level of practicality, but it now benefits from one of Audi’s latest interiors. It’s a great all-rounder in 2.0-litre TDI form, with this 3.0-litre V6 TDI being the relaxed cruiser of the range. With a hot RS 6 model on the way that will serve up more thrills, the A6 Avant is looking like the most complete Audi estate ever.

With new models being launched every year wearing a Q badge on their bootlids, Audi is rapidly becoming an SUV brand that just happens to make hatchbacks, coupes, convertibles and a supercar. However, Audi hasn’t given up on the good old mid-sized family estate just yet

The new A6 Avant is wider, taller, more efficient and is better to drive than its predecessor. It’s also, to our eyes at least, prettier and has a more impressive interior packed with Audi’s latest and finest technological toys. Curiously, though, the bit you’re really interested in has remained the same – boot room.

Despite the boot’s length being 19mm longer than the old A6 Avant’s, at 586 litres it’s identical in actual capacity. And when you drop the rear seats to reveal 1,680 litres, that’s the same too meaning the Audi actually shapes up quite badly compared to the BMW 5 Series Touring and the Jaguar XF Sportbrake as both are larger overall.  The Mercedes E-Class’s mammoth 640-1,820-litre boot remains unchallenged yet again. 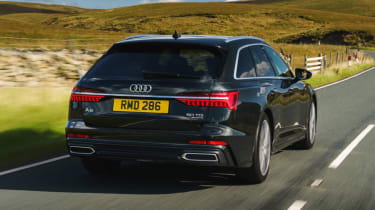 The Audi’s boot is full of useful touches though as there are cargo rails, lash down points and the seats fold down completely flat. There’s noticeably more room to stretch out in the back too, and the whole interior feels just that little bit more spacious than before. It’s also better built than the old car with the A6 easily rising to the top of the class for quality – it feels extremely plush and luxurious inside.

That feeling of space is no doubt helped by the design. The A6 follows on from the A8 and A7 in featuring Audi’s latest interior ambience, so buttons and knobs have been replaced by a strong, piano black horizontal panel that features an 8.8-inch infotainment screen. When switched off it blends seamlessly into the panel, but when switched on it uses Audi’s latest MMI Touch system that relies on being touched and prodded. Here you’ll find the navigation, radio and media controls.

Another screen sits beneath it and this is home to the climate control. When both screens are in use it’s an impressive thing to look at and makes the Jag and even the BMW look rather last century. Moreover, just like the A8, the screen uses haptic and acoustic feedback to makes things easier, but in all honesty it’s still trickier to use on the move than it really should be. And the evidence from all that prodding and swiping are the fingerprint marks – it’ll give people with OCD a complex.

Underneath things are rather more straightforward. In time there will be a wider range of petrol and diesel versions including hot S and RS models, but for now it’s all pretty straightforward. There’s a 201bhp 2.0-litre diesel badged 40 TDI with two-wheel drive, a 12-volt mild hybrid system and a seven-speed S tronic gearbox, and a 3.0-litre V6 diesel with quattro all-wheel drive, a 48-volt mild hybrid system and an eight-speed tiptronic gearbox – that’s called 50 TDI. It’s the larger engine we’ve got here.

With 282bhp and 619Nm of torque, the 3.0-litre TDI is a great performer, pulling strongly through the rev range and for the most part it only emits a distant hum; only when accelerating is there a typically V6 roar. Our car had optional air suspension which rides out B-road bumps well but our A6 S-line’s optional 20-inch wheels couldn’t resist thumping into pot holes and shimming over broken surfaces. 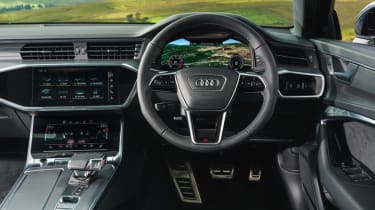 The V6’s strong characteristics are almost ruined by the eight-speed tiptronic box, however, which can never find the right gear it would like and is slow to kick down. Couple this with the V6 feeling heavy and a touch cumbersome – despite V6 models optionally getting four-wheel steering – and you realise that this is a cruiser and, with smaller wheels fitted, a comfortable one too.

We also tried the 40 TDI in entry-level Sport trim and with its two-wheel drive, no fancy four-wheel steering and lighter 2.0-litre engine over the front axle, it steered more crisply and is far more enjoyable to drive enthusiastically. In fact, in terms of handling competence, it’s not that far off a BMW 5 Series Touring, but the typically wooden Audi steering removes that last degree of feeling.

For now the model range is simply Sport and S-line with the entry model coming with the eight-inch upper touchscreen and lower screen, 18-inch wheels, heated leather seats, LED lights and lane departure warning. S-line adds sportier styling, 19-inch wheels, a 20mm drop in ride height and matrix LED headlights. Audi will sell you a number of optional packs with the highlight being the Technology Pack that gives you a 10.1-inch upper touchscreen, Audi’s Virtual Cockpit and wireless charging for £1,495. The A6 Avant is well equipped as standard so avoid being tempted by the options list. Stray and you’ll turn a £53,000 car into the £72,000 of our test car  – a sum of money that is, frankly, obscene.