Better to drive than ever before and supremely proficient over long distances; the smaller diesel is a surprise hit 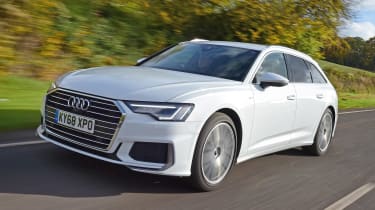 The A6 Avant has been designed to cover long distances in a quiet and sophisticated manner, and is not, in its present guise, the first choice for buyers in search of keen dynamics. For that, the BMW 5 Series Touring and Jaguar XF Sportbrake remain the prefered choices, although the gap is narrower than before.

That said, sporty Audi S6 and RS 6 models will follow in the future, so hold on until then if you fancy a more performance-led Audi estate. In the meantime, it’s best to approach the A6 Avant as a smooth operator. 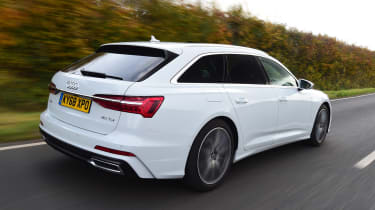 We’d avoid opting for the S line’s 20-inch alloy wheels, because even with the optional £2,000 air suspension (50 TDI only), the car crashes into potholes and shimmies over rough surfaces. Better, we think, to stick with a smaller wheel size and enjoy a smoother, more cosseting ride.

You can also equip the 50 TDI models with dynamic all-wheel steering. At low speeds, this £2,000 upgrade turns the rear wheels in the opposite direction to the fronts, reducing the turning circle and minimising the effort of the driver. At higher speeds, the counter-directional rear steering improves handling and stability, and makes the car feel more responsive.

It’s very good, but it can’t solve one of the A6 Avant’s traditional weaknesses: numb steering. It’s accurate enough but is totally devoid of feel and is, perhaps, where you’ll find the largest gap between the A6 and the 5 Series.

But overall, the A6 Avant could represent the best compromise in the segment, being better to drive than the E-Class Estate and with a greater sense of occasion and suppleness than the 5 Series.

In time, Audi will offer a wide range of petrol and diesel engines, but for now, your choice is limited to two diesel units. There’s a 201bhp 2.0-litre four-cylinder diesel badged 40 TDI and a 3.0-litre V6 diesel called 50 TDI.

Both offer very different characteristics, not least because the smaller 40 TDI is paired with a seven-speed S tronic transmission and front-wheel-drive, while the 50 TDI comes with an eight-speed tiptronic gearbox and all-wheel-drive. Both use a 48-volt mild hybrid system, but more on this in the next section.

One could argue that the 40 TDI exists to meet emissions targets, but it’s no slouch. In fact, it’s the more responsive of the two engines and it is better to drive than the more powerful 50 TDI. 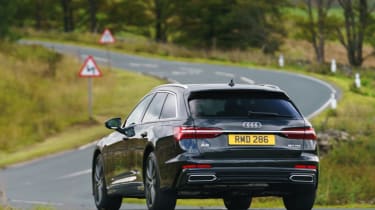 With 202bhp on tap, the 40 TDI will hit 62mph in 8.3 seconds, before going on to reach a top speed of 149mph. It helps that it’s lighter than the 50 TDI, while the S tronic dual clutch transmission responds with snappy gear changes when you put your foot down.

Not that the 50 TDI doesn’t hold some appeal. Thanks to 282bhp and 619Nm of torque, the 0-62mph time is polished off in a hot hatch-baiting 5.7 seconds, before the rapid estate hits a top speed limited to 155mph.

Unsurprisingly, it pulls strongly through the rev range, for the most part emitting just a distant hum, although there’s a satisfying soundtrack from the V6 when you’re pressing on. Sadly, the traditional automatic transmission doesn’t respond as swiftly as the S tronic, which serves to dilute the driving experience.