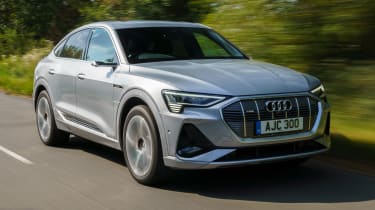 Whether you opt for this sleeker Sportback over the already quiet and comfortable e-tron SUV will come down to personal taste. You will need to step up to the more expensive specs, but like-for-like, the premium this car commands isn’t as sizeable as you might imagine. The Jaguar I-Pace is a superior all-rounder, however, with sharper handling and a better real-world range.

The Audi e-tron has been on sale for a little more than a year now, and as is the way with the German company’s product cycles, it’s time to welcome the coupé-inspired e-tron Sportback to the UK.

The recipe, as you’d expect, follows the format Audi has already applied to the Q3 and upcoming Q5. The e-tron Sportback’s sloping roofline sacrifices two centimetres of rear headroom for a shape that’s claimed to be more aerodynamically efficient. It’s certainly more eye catching – although whether that’s for better or worse, we’ll leave for you to decide.

However, this is still a 2.5-tonne SUV that not only looks huge, but feels it from behind the wheel, too. On the move, the newcomer is all but indistinguishable from the existing e-tron. It’s fast – 0-62mph takes 6.6 seconds (or 5.7 seconds in S mode) – and you can call upon the vast reserves of grip supplied by the quattro four-wheel-drive system to put all 402bhp to the road.

On more technical roads the Jaguar I-Pace remains better to drive, with more precise steering and body control. However, the Audi excels when it comes to refinement. Double-glazed side windows are a £525 option and, when coupled with the £1,250 digital door mirrors that reduce wind noise at high speed, make the e-tron one of the quietest and most refined cars on sale. The Sportback isn’t available in cheaper Technik or Sport trims, so you’ll have to cough up more for S line and Launch Edition specs, or the generously kitted Vorsprung version. 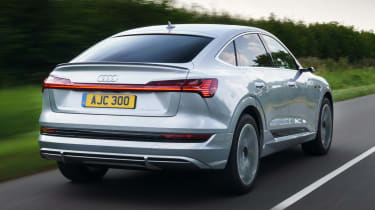 All e-tron Sportbacks get privacy glass and 21-inch alloys, as well as Matrix LED lights and leather sport seats, while quality is first rate. Rear space isn’t as compromised as you might expect; that two centimetre drop in head height feels negligible, and there’s plenty of legroom for stretching out. The boot shrinks by 45 litres, but with a 615-litre loading total (including space for the charging cables under the bonnet) this is still an impressively practical family car.

Of course, the trick charging system is this model’s trump card, with its 150kW maximum rate. We can vouch for the 80 per cent boost in a mere 30 minutes. If you’ve got the ability to charge at home, the e-tron will replenish its batteries in less than nine hours via an 11kW wallbox.