With 592bhp, the new Audi RS Q8 is a mightily impressive piece of machinery however it fails to be an overly memorable one, especially with its £111k price tag 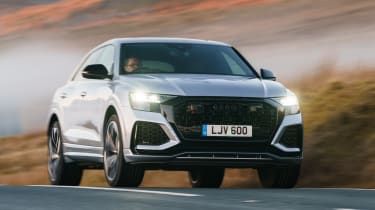 Audi Sport has impressive form when it comes to developing large, practical and thunderingly fast family transport, but the RS Q8 isn’t its finest creation. The monster SUV is too big to be truly engaging, too heavy to be agile, and not particularly engaging to drive, despite its vast reserves of power and Nürburgring record-setting credentials. Happily, the manufacturer does have a solution; it’s called the RS 6, and it costs £20,000 less.

If you’re getting a bit bored of the relentless stream of new electric cars coming on to the market, Audi Sport reckons it has the antidote. Meet the RS Q8, a £111,400 super-SUV that is as quick as a Porsche 911 and as heavy as a Rolls-Royce Phantom.

Everything about the RS Q8 is supersized, from its enormous 23-inch alloy wheels to its 591bhp 4.0-litre twin-turbo V8 powerplant. With the exception of the R8 supercar, it’s also the most expensive model in Audi’s vast product portfolio.

In order to ensure the RS Q8 handles and goes like a true Audi Sport model, the manufacturer has raided its technical armoury and lavished the large SUV with every piece of engineering wizardry available to it. Adaptive sports air suspension, quattro all-wheel drive, electromechanical active roll stabilisation, RS carbon-ceramic brakes, all-wheel steering and a quattro sport differential are just some of the highlights packaged inside this technical tour de force.

Yet let’s not forget that engine. The 4.0-litre twin-turbo V8 is the same basic unit as is found in the RS 6 Avant and RS 7 Sportback, but here it develops 591bhp and 800Nm of torque. The result of that – and all the on-board technology listed earlier – makes the RS Q8 the world’s fastest SUV, with a 7min 42sec lap time at the Nürburgring. For context, that’s about as fast as a Porsche Cayman GT4. 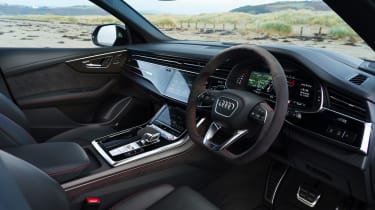 While on the outside the flared arches and gaping air intakes certainly leave you in no doubt as to what the RS Q8 is all about, the cabin is a far more restrained affair. The Alcantara-trimmed steering wheel and padded leather bucket seats are the only real noticeable changes over a regular Q8.

On the move, the RS Q8 does a good job of masking its performance potential, too. Even on those enormous alloy wheels the ride is comfortable enough – although you should definitely keep an eye out for potholes. Meanwhile, the engine and gearbox are hushed and refined, and the rear-wheel steering makes the Audi far more manoeuvrable at lower speeds than you would think.

However, it’s not difficult to unleash the RS Q8’s wilder side, which is hidden within the car’s eight – yes, eight – driving modes. Select Dynamic and the SUV literally hunkers down, by lowering the ride height on its air suspension, and puts everything at its most aggressive setting. The response from the engine is explosive, while the big SUV’s quattro set-up ensures all of that performance is efficiently put down on to the tarmac. Audi says 0-62mph takes 3.8 seconds, and we believe every bit of it.

Of course, eventually you have to slow down the RS Q8, and this is where those enormous 10-piston carbon-ceramic brakes come into play. However, as good as they are, you’re always aware of the RS Q8’s physical size and weight when you hit the stoppers hard.

It’s a similar story when it comes to handling; the Audi resists roll very well, staying flat and stable, but it doesn’t feel as nimble or involving as a Porsche Cayenne Turbo. It’s almost as if all of those layers of technology and assistance systems create a barrier between you and the actual driving experience. Nevertheless, the RS Q8 is a mightily impressive piece of machinery – just not an overly memorable one.