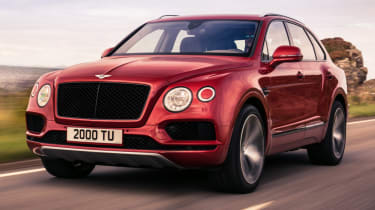 Bentley has unveiled a V8 petrol-powered variant of its Bentayga SUV. It sits in the middle of the Bentayga range and will cost from £136,200 when it goes on sale to UK customers in March.

Based on same VW MLB-Evo platform as the Audi Q7 and using the VW Group V8 engine in the same state of tune as another sister vehicle, the Porsche Cayenne Turbo, the Bentayga petrol V8 bridges the gap between the entry-level (£135,800) V8 diesel and the range-topping (£162,700) W12 petrol. The V8 petrol engine is a 4.0-litre twin-turbo unit that’s also found in the Lamborghini Urus, another car that shares the VW Group’s large SUV platform. The engine produces 542bhp and 770Nm of torque, 0-62mph takes 4.5 seconds and it reaches a top speed of 180mph - despite its hefty kerb weight of 2,395kg.

Power is fed through an eight-speed automatic transmission and permanent four-wheel-drive with 60 per cent of the available drive being sent to the rear wheels. Bentley states that the Bentayga V8 petrol achieves 24.8mpg and emissions of 260g/km CO2 on the combined cycle. To assist in this, the engine is fitted with cylinder deactivation, where it can run on four cylinders when needed. 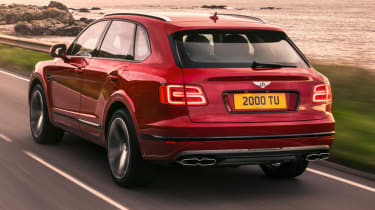 A unique feature on the Bentayga V8 petrol is the optional carbon ceramic brakes, which Bentley claims are the biggest ever fitted to one of its cars and, indeed, the largest front brakes ever fitted to any production car. The 10-piston front brakes measure 440mm in diameter, which is a 40mm increase on the Bentayga’s standard steel brakes, the rear carbon ceramic brakes measure 370mm.

The massive brakes produce a maximum braking torque of 6,000Nm, according to the Crewe marque. They are are tucked behind 21-inch wheels as standard but customers can opt for bigger 22-inch wheels or smaller 20-inch sets if they so desire.

Like on the standard Bentayga, air suspension is fitted on the V8 petrol variant, and the car is equipped with a choice of four different driver modes. There’s hill descent control as standard too, and a switch in the boot that can lower the Bentayga’s suspension if required to help when loading the car. 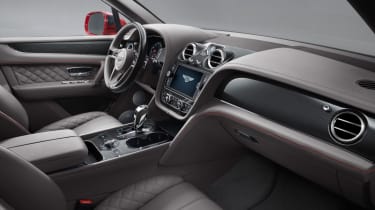 Inside, customers can choose between a four, five or seven-seat configuration, while a ‘high gloss’ carbon fibre finish is available on the Bentayga for the first time. Bentley has also debuted its ‘cricket ball’ leather interior option that finishes the cabin in a dark chestnut hue and comes with a wood trimmed steering wheel.

The Bentayga V8 petrol goes on sale this spring, and becomes the third model in the Bentayga range. A fourth Bentayga could be on its way soon as a plug-in hybrid version has been rumoured for an introduction later this year, with technology likely shared with the Porsche Cayenne S E-Hybrid.

What are your thoughts on the new V8 Bentayga? Better than the Cayenne? Let us know in the comments below.

Welcome to our Geneva Motor Show hub page, scroll down for all our Geneva content...
Aston Martin DBX vs Bentley Bentayga 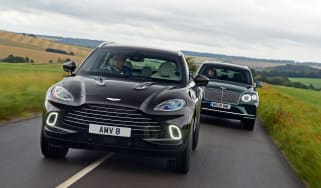