Prices have been revealed for BMW’s latest crop of plug-in hybrid models, with latest X3 from £47,565 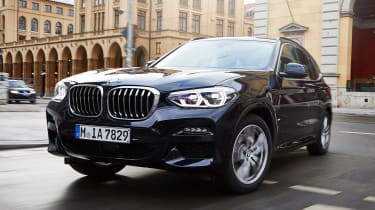 BMW has revealed prices for its latest range of plug-in hybrid models. The range of electrified cars, first shown at this year's Geneva Motor Show is now complete, with every version now on sale in the UK. The new range features the German brand’s most up-to-date battery technology and a range of economy and efficiency improvements.

Leading the charge is the all-new BMW X3 xDrive30e, which uses the same petrol-electric set-up as the 330e saloon. The new hybrid X3 is on sale now and costs from £47,565, with first deliveries due in December. BMW claims the xDrive30e will do 34 miles on electric power, emitting 49g/km of CO2. Charge it regularly enough and you'll return as much as 128.4mpg, according to BMW's officially WLTP-rated figures. An all-electric BMW iX3 is due in 2020.

Also new is the larger BMW X5 xDrive45e plug-in hybrid, which uses a larger six-cylinder petrol engine mated to a 24kWh battery. BMW claims a 54-mile EV range, and up to 235.4mpg on the average combined cycle. Prices start from £63,165. 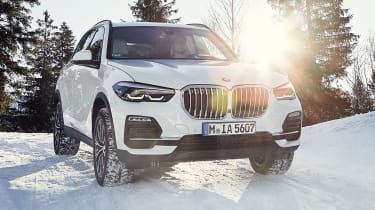 The BMW 530e plug-in hybrid gets a new lithium-ion battery, which provides an all-electric range of 35 miles. The revised 5 Series plug-in has a claimed economy figure of 156.9mpg and CO2 emissions of 36g/km. The revised BMW 530e costs from £46,820.

BMW has also introduced an all-wheel-drive version of the 530e. Called the BMW 530e xDrive, it is slightly less efficient than the rear-wheel drive model, but BMW claims it will still return up to 141.2mpg and do 30 miles on electric power. The 530e xDrive commands a premium of £2,000, with prices starting from £48,820.

A revised version of the 225xe was also shown on BMW’s stand at the Geneva show back in March. That car will do 31 miles on EV power, with claimed economy nudging up to 166.2mpg. Prices start from £35,300. Like before, there are currently no plans to offer the plug-in hybrid powertrain on the seven-seat 2 Series Gran Tourer, only the smaller Active Tourer.

The plug-in hybrid version of the updated BMW X1 (badged X1 xDrive25e) is due early in 2020. Later down the line, BMW will offer an estate version of the 330e, called the 330e Touring. No prices or specs have been revealed, but expect a slightly shorter all-electric range, and a higher list price. A premium of around £2,000 is likely, meaning prices should start from a smidge under £40k.