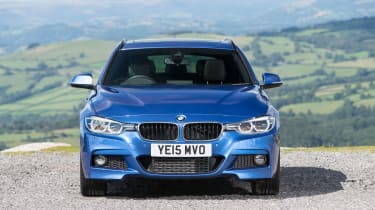 While the 3 Series saloon is facing strong competition from the likes  of Jaguar, Mercedes and Audi, the Touring’s seat at the top of the estate class has never really been challenged. There’s little chance of it being toppled after this light mid-life facelift and upgrade, either. It’s still the roomiest and best compact exec to drive on the market despite the 335d’s sky-high list price. The 330d version is just as impressive, more economical and cheaper to buy.

In a time when SUVs and crossovers are the latest must-have, you’d expect BMW’s top seller to be the X3 or even the X1. Amazingly, the car that wears the crown of Britain’s best-loved BMW is the 3 Series.

It’s been around for 40 years, and while a cart load of best-in-class accolades have been placed on its head, the competition is catching up – and fast. Mercedes’ C-Class showed how luxurious a compact exec could be, Jaguar’s XE has toppled the 3 Series in the dynamic stakes and the new Audi A4 looks set to match it on every level.

The venerable BMW has been treated to a host of changes to keep it on top, but the XE 4-door still has the refreshed 3 Series licked... just. Yet now is our chance to try out the Touring version of the 3 Series – the undisputed compact exec estate class king. 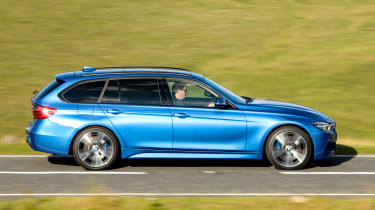 Before we come on to whether the Touring is still the best, let’s remind ourselves about BMW’s work on the 2016 facelift. It’s certainly a case of comparing apples with apples here, as the brand’s designers have had a relatively easy time of updating the looks. Of the revamps to the five previous generations of the 3 Series, 2016’s is arguably the lightest. At the front, there are new LED daytime running lights and slightly wider vents, while the tail-lamps are now full LEDs. But that’s it.

If you had your work cut out noticing those changes, you’ll miss the tweaks inside. Some new options allow buyers to greater personalise their car, but it’s business as usual – which means a well built cabin and a sporty, low-slung driving position.

The Touring gets a class-leading 450 litres of luggage space, which rises to 1,500 litres with the rear seats down. A standard electric tailgate makes supermarket chores that little bit easier, too. We got behind the wheel of the range-topping 335d xDrive in racy M Sport trim. It delivers fine handling, with masses of grip thanks to the xDrive four-wheel drive, and claims 49.6mpg economy and 151g/km CO2 emissions. 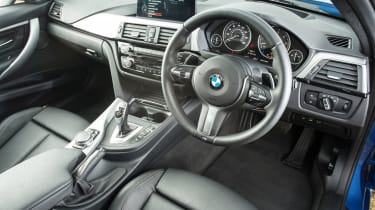 Acceleration is blistering, too, with 0-62mph taking just 4.8 seconds and a top speed pegged at 155mph, courtesy of a 3.0-litre straight-six diesel serving up 313bhp and 630Nm of torque. Power comes in from as low 1,500rpm and delivers serious grunt – it’s hooked up as standard to an eight-speed auto box (there’s no manual option) that rattles through the ratios quickly and smoothly.

While the tweaks outside are minimal, it’s underneath where the engineers have spent most of their time fettling. Suspension changes provide better body control and the steering has been worked on to give more feedback. A Servotronic set-up comes as standard (increasing the level of assistance with road speed), while Variable Sport costs £210. The latter was fitted to our test car, and although it means quicker steering, it doesn’t inspire as much confidence through bends – so, we’d stick with the Servotronic.

One option that is worth having, however, is the £515 adaptive dampers. They allow you to switch from supple Comfort mode all the way up to stiff Sport+. Importantly, ride quality isn’t affected no matter the setting. 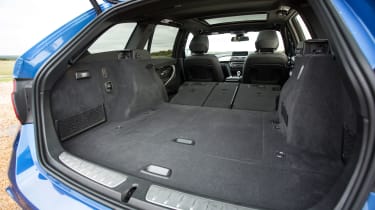 The range-topping 335d is generously equipped and only comes in M Sport spec – adding a racy bodykit, full leather and 18-inch rims. There’s also no two-wheel-drive option, which throws up an important point: while there’s no denying the 335d’s performance, the less powerful 258bhp 330d xDrive is just 1.2 seconds slower from 0-62mph, is more efficient and is £1,435 cheaper. Go for the two-wheel-drive 330d M Sport, and it costs £3,000 less. That’s the car we’d be most tempted by.