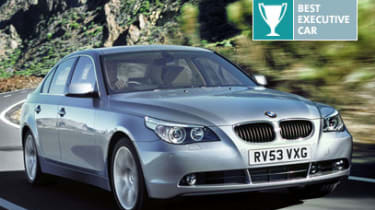 A double podium finish for BMW's evergreen 5-Series proves the German manufacturer has the executive class completely sewn up. If you're buying new or used, your local BMW dealer should be a one-stop shop. Toppling its predecessor off pole position, BMW's latest 5-Series has proved its worth with high marks in virtually every judging category. We collected questionnaires from owners of all types of 5-Series, from basic diesel models to performance car-chasing M5s. All respondents were unanimous in their praise for the German saloon and estate. Mercedes E-Class has risen one place to finish third, while the latest generation of Audi's A6 has entered the leaderboard above Jaguar's ageing S-Type, which has done well to make it into fifth place. Early next year, its XF replacement will be introduced with a sharp new look and an overhauled chassis. And traditionalists should prepare for a shock, as the newcomer is set to leave most of the S-Type's regal styling cues behind.

“My M535d Sport diesel is much faster than my previous 530i, and gives 36mpg on motorways. The ride is smooth on unbroken tarmac, but jiggly on bumpy roads.”

“An awesome all-rounder with everything needed for a family. High service costs though and the fuel economy is not what the manufacturer would have you believe.”

“Had a E60 BMW 530d for three years, covered 90,000 miles, excellent car. Changed it for a E60 M5 at the beginning of this October and it proved to be far too thirsty, averaging around 12mpg! I have just traded it in last week for a new 535d M Sport which is excellent. Having had one of the worst E60 5-Series it is still the doyen of executive cars.”

“Brilliant to drive, quick yet economical, done 30,000 in less than a year with no service costs. Love it!”

“Good car overall but purchasing a diesel was for me a mistake because I don’t like the noise it makes at low speed and when cold. The car is fitted with run flat tyres which are a great concept but because the suspension has not been designed to compensate for the stiff sidewalls the ride over poor surfaces is poor, also they are noisy when worn.”

Make no mistake, this is a good result for BMW. However, slipping two positions down the chart will cause some furrowed brows at the firm's HQ. What's more, the slide has put even more space between the blue propeller and its all-conquering Lexus rival. The main area where you say it needs to improve is in running costs – 22nd place out of 37 shows you want your BMW to work harder for your money.