We love the BMW 520d Touring, but is the more powerful 530d Touring worth the extra cost? We find out... 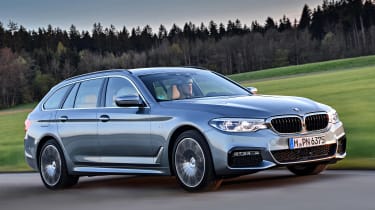 The BMW 530d’s major downside is that the cheaper 2.0-litre matches it in almost every area, yet costs around £8,000 less. Both cars are exceptionally capable family wagons, with bucket loads of space, plenty of kit and a refined yet sporty drive. But the 520d’s lower list price, favourable emissions and improved fuel economy make it a much more sensible choice for cost conscious estate car buyers.

We've already driven the new BMW 520d Touring and declared it one of the most complete family cars money can buy. But if you like your wagons with a bit more grunt, then this 3.0-litre might be just the ticket.

This 530d uses the same 261bhp six-cylinder diesel engine as the saloon. With 620Nm of torque it’ll sprint from 0-62mph in just 5.8 seconds, and hit an electronically limited top speed of 155mph.

The smooth power delivery allows you to build speed quickly and effectively without any need to adjust the car’s settings via the now-familiar ‘Driving Experience Control’. Leave the car in its Adaptive mode and the gearbox shifts just as you’d expect it to; slurring cogs at a cruise, while quickly shifting down when you dial in more power. 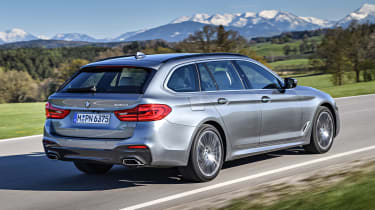 All 5 Series Touring models feature self-levelling air suspension at the rear – right through from the basic SE to the top-of-the-range M Sport. The result is a pleasingly supple ride, yet not one that wallows through the corners. Body control is excellent, in fact, and mated to the same direct and well-weighted steering, the Touring is almost indistinguishably as involving to drive as the saloon.

We praised the 520d Touring for its refinement and exemplary long distance manners, and the six-cylinder car only improves on this. It’s silky smooth and all but silent at high speeds – barely breaking a sweat even in the heavy rain we suffered on our test drive.

But for many buyers, whether to opt for a 520d or 530d will come down to costs. The 520d we have already tested was in well-equipped SE spec and comes with all the goodies any modern family could want, yet it falls beneath the £40,000-threshold for higher road tax. That means that on top of the lofty list price, buyers of this 530d (or indeed the slower 520d in pricier M Sport trim) will pay an extra £310 per year for the first five years. Business users opting for the six-cylinder diesel will be subject to more Benefit in Kind tax, too, due to the 530d’s greater 25 per cent (the 2.0d SE sits in band 21) P11D BiK rating. 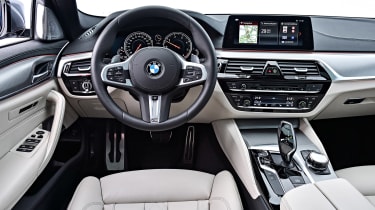 Practicality is totally unaffected whichever car you buy. That means a sizeable 570-litre boot (10 litres more than before) with the rear seats in place, expanding to 1,700 litres with them folded flat. There’s a handy storage area under the floor to hide the two-piece retractable parcel shelf, as well as buttons in the boot to electrically lower the 40:20:40 split-fold seats.

Even with our car’s panoramic glass roof, room in the back remains generous thanks to the clever bubble effect in the headlining. This ensures even tall adults will be able to get comfortable, and there’s enough knee room behind a six-foot-tall driver, too.