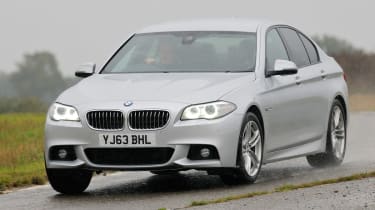 BMW’s 5 Series badge has been a firm fixture in the car market for well over 40 years. The sixth generation is the F10, made from 2010 to 2016, and it cemented its reputation as one of the leading executive car choices in the world.

The 5 Series generation that preceded this one certainly had its detractors, mostly due to its controversial styling, both inside and out. But those criticisms quickly disappeared with the sixth-generation car, which toned down the quirkiness and returned to a more sober, conservative character. It’s one of the most popular choices for those looking for executive wheels.

The sixth-generation 5 Series saloon debuted in 2010, but the model had actually been heralded by an alternative body style that went on sale the year before: 2009 saw the launch of the 5 Series GT body style. The GT (Gran Turismo) was an all-new model in the line up – a distinctive-looking five-door hatchback variant that adds some extra practicality. However, the biggest sellers in the 5 Series range remain the four-door saloon and Touring five-door estate body styles.

A subtle facelift to the car’s looks, as well as some updated interior technology, occurred in 2013. This facelift helped keep the 5 Series looking relatively fresh, but in the intervening years rivals have clawed back some ground on the BMW, with newer models like the Jaguar XF and the advanced Mercedes-Benz E-Class hitting the market.

There’s a strong choice of engines under the bonnet, all of which benefit from BMW’s EfficientDynamics technology to boost fuel economy and lower CO2 emissions. Petrol units include a 2.0-litre turbocharged four-cylinder powering the 520i and 528i models, a forced-induction 3.0-litre six-cylinder for the 535i, while for the 550i, there’s a twin-turbo 4.4-litre V8. BMW’s eco model in the range, the ActiveHybrid 5, combines a 3.0-litre six-cylinder turbo petrol engine with a lithium-ion battery pack – although it’s not a plug-in hybrid.

The M5 sports saloon uses another version of BMW’s high-performance V8 petrol engine, but ups the ante to produce a crushing 552bhp, while a special M5 celebrating 30 years of the high-performance model boosted things even further with 592bhp.

Fleet buyers and those who do more miles will be more interested in the two diesel engines on offer, though, both in varying power outputs. A 3.0-litre straight-six diesel powers the 530d and 535d models, while a 2.0-litre four-cylinder unit powers the 518d, 520d and 525d cars.

Most models in the range have six-speed manual transmission as standard, with eight-speed automatic an option; a few models in the range are auto-only, however. All 5 Series models offered in the UK have rear-wheel drive – despite being available in other markets, xDrive 4x4 is not an option for British buyers. 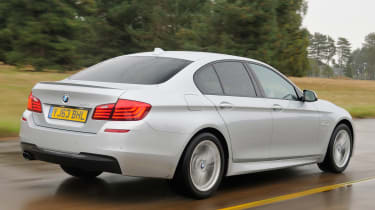 The Luxury version adds cosmetic enhancements plus larger 18in alloys and a better multimedia system with a hard disc drive. The popular M Sport model is more aggressively styled and comes with harder suspension for a sportier drive – although you can opt to have standard suspension on M Sport models if you prefer.

Despite its age, for many the BMW 5 Series remains the default executive car choice, and it's not hard to see why. Even with strong competition such as the Audi A6, Mercedes E-Class and Jaguar XF, it still leads the way in several key areas.

It’s got badge prestige in spades, the interior is extremely well-built and high quality – even if it is starting to look a little old inside compared to more modern rivals – and its driving dynamics (on most versions) are up there with the best in class. But it's also comfortable, refined, efficient and practical, while the high-performance M5 model brings supercar-baiting performance.

Despite best efforts from Audi and Mercedes, the BMW 5 Series still remains one of the best executive cars to drive – although the Jaguar XF is arguably even better again. But this performance behind the wheel is where a large proportion of the BMW’s appeal lies thanks to its rear-wheel-drive setup, great refinement and strong pace.

It's the impressive handling of the 5 Series that grabs the interest if you’re a keen driver – its steering is naturally weighted and delivers a decent amount of feedback through the wheel, while the balanced chassis also makes it fun to thread down the right road, as well as comfortable on the motorway.

The 5 Series is also the only executive car that feels right when fitted with a manual gearbox – the slick and precise action of the six-speed transmission adds to the fun.

However, one issue with the 5 Series is that cars without the optional adaptive dampers don't offer the same excellent ride-and-handling balance. The standard springs on SE cars are fine, but if you do venture into the options list make sure you consider shelling out for the adaptive items.

Buyers will also be happy to know that the fun factor of the BMW 5 Series doesn't come at the expense of refinement, as the German manufacturer has ensured road and wind noise are damped out nicely.

A small criticism is that M Sport spec cars can be slightly too firm at low speeds owing to the stiffer suspension and bigger wheels – SE models ride much more smoothly. However, the suspension settings from the SE variant can be set-up on the M Sport cars at no extra cost, which improves comfort on bad surfaces.

The diesel engines in the 5 Series are truly impressive all-rounders, making them our range choice despite the general competence of the petrols.

Our choice of engine from the entire BMW 5 Series range then, is the 187bhp 520d. This particular unit is capable of 0-62mph in just 7.9 seconds – or 7.7 if you go for the auto – and has a top speed of 147mph. The economy figures are equally as impressive, as the 520d manages a best of 68.9mpg and emits 109g/km of CO2 when fitted with the smooth eight-speed self-shifting gearbox.

It is worth noting though that the 552bhp M5 is truly astonishing and will have most things this side of a Ferrari worried. It's not as exciting an engine as the previous naturally-aspirated V10, but it has far more useable torque and is much more efficient, making it a more usable car.

All of the engines in the BMW 5 Series range are impressive, but overall, the diesels outshine the petrol units thanks to their excellent blend of performance and efficiency.

Our pick of the engine range is the 2.0-litre 520d. In lower-power trim as fitted to the 148bhp 518d model, the 2.0-litre actually returns marginally less than the 520d, with a best of 67.3mpg and 110g/km CO2 (again in conjunction with the automatic box), so we'd spend that little bit extra and have not only improved performance but stronger efficiency, too. 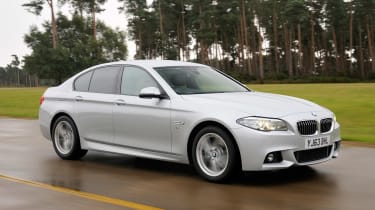 The petrol powered 550i and M5 provide blistering pace, but return a reasonable combined economy of 39.2mpg and 28.5mpg respectively. The scorching 592bhp M5 '30 Jahre' manages to equal the standard M5 despite its extra power, returning 28.5mpg and 231g/km of CO2.

In terms of petrol engines, the 181bhp 2.0-litre petrol engine with the eight-speed automatic gearbox is the most economical, thanks to a fuel economy of 47.1mpg and CO2 emissions of 139g/km.

The 2.0-litre engine also powers the 528i, which sees fuel economy decrease to 46.3mpg (with 142g/km of CO2) on the SE model due to the extra 60bhp. It's a less characterful engine than the old six-cylinder powerplant, so we'd rather opt for the diesel unless outright rev-chasing acceleration is what you really enjoy.

BMW also offers financial incentives to its buyers, which include a top-value service pack that provides five years’/50,000 miles of maintenance cover. There's also the strong predicted residuals of around 46 to 47 per cent on the more popular diesel models.

It would take a keen-eyed observer to notice the tweaks BMW made to the 5 Series as part of the facelift given how subtle they were. The indicator repeaters were moved from the front wings to the door mirrors, and the bumpers received some revisions.

Either way, there was hardly anything wrong with the looks of the pre-facelift car, so the changes have done it no harm at all. However, some detractors may say it looks too conservative, and it can't match the sleek looking Jaguar XF for outright style, or the more modern design language of the latest Merc E-Class.

BMW fits every model of 5 Series with alloy wheels and xenon headlamps as standard, but only M Sport spec cars benefit from a muscular, aerodynamic bodykit and a smart looking darkened chrome finish for the front grille and exhaust pipes. 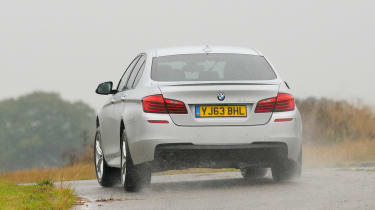 These cars also feature a pair of neat LED front fog lamps, and in addition to the subtle facelifted exterior BMW also made slight changes to the cabin of the 5 Series during the most recent round of revisions. These included a new dashboard fascia and colour options.

Arguably, the biggest change inside was the revisions to the BMW’s iDrive infotainment control; if the buyer opts for the Professional Media sat-nav package, the iDrive system gets a larger rotary controller with a touch pad that lets the driver 'write' addresses letter by letter.

Otherwise, little else has changed since the current 5 Series launched. From the entry-level SE model to the range-topping M5, each 5 Series' cabin is slick and impeccably built, with good use of high-quality materials. However, compared to rivals like the new Mercedes-Benz E-Class, the BMW’s interior is starting to look and feel a little plain.

Still, the layout is intuitive and the lower driving position means you'll feel comfortable behind the wheel in no time and nicely integrated with the car to highlight is fun handling balance.

The BMW is a big car, so it's no surprise that it features a supremely roomy interior.

Rear occupants in the 5 Series get plenty of head and legroom, but it's also worth noting, however, that the middle occupant may find their comfort compromised by the car's bulky transmission tunnel due to the rear-wheel-drive layout. 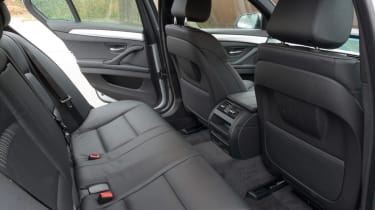 BMW has made intelligent use of the 5 Series' spacious interior, and dotted around the cabin is plenty of storage space, including large door bins and a decent-sized cubbyhole that’s hidden beneath the armrest located between the front seats.

Despite these solutions, the 520-litre boot in the BMW 5 Series can’t match the 540 litres of boot space on offer in the Mercedes E-Class and Jaguar XF. A folding rear-bench seat also comes at a premium.

Therefore, if it's extra practicality you're after, then the excellent 5 Series Touring estate would be a better bet as it offers a greater range of storage options and 560 litres of boot space.

The 5 Series GT fastback is also very practical and features a sliding rear bench seat to increase the maximum boot space to 650 litres with the rear seats in place.

The BMW 5 Series feels built to last both inside and out and gives an overall impression of being a top-quality product. However, while material quality is better than in the Jaguar XF and the equal of Audi’s A6, the finish of the new Mercedes E-Class is even nicer, while it also offers a more high-tech feel.

In our 2016 Driver Power customer satisfaction survey, the 5 Series finished a respectable 53rd out of 150 cars, while BMW’s performance in the manufacturer rankings is consistently around mid-table. 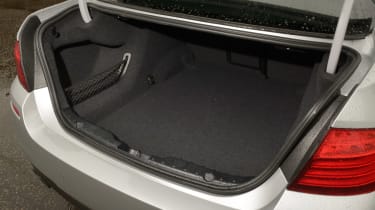 Furthermore, the 5 Series' safety credentials make it at least as safe as its executive rivals. BMW fits six airbags and stability control as standard, and with a host of other safety options available it’s no surprise that the 5 Series comfortably achieved a maximum five-star score in Euro NCAP crash tests.

A night-vision package is also available, with headlamps that can automatically identify pedestrians and highlight them with a separate beam of light. This feature doesn’t come cheap though, so think wisely before ticking this particular option box.