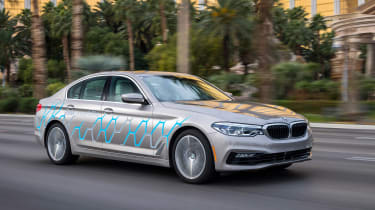 From our prototype drive in the autonomous 5 Series, BMW looks well advanced on the road to offering a self-driving car in the near future but also having some of the answers as to how our lives will be improved thanks to the availability of autonomous vehicles.

BMW’s all-new 5 Series hits showrooms this year loaded with clever kit but Auto Express was given the chance to get behind the wheel of the firm’s most advanced 5 Series model yet.

The self-driving 530e prototype was on show at CES 2017 and we took it for a spin around Las Vegas to test out its autonomous capabilities, plus the advanced next-generation connected tech on board. And unlike many self-driving car tests, we were actually allowed in the driver’s seat rather than sitting on the passenger side with an engineer in control.

We were also permitted to drive the Personal CoPilot prototype on public roads with free-flowing Vegas traffic just centimetres away - evidence of how confident BMW feels in its tech. 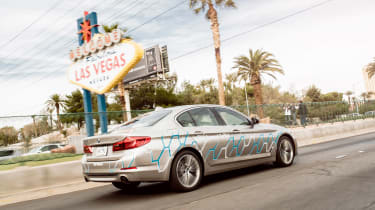 Our test started at the Las Vegas Convention Centre where we manually drove away from the traffic-laden streets before handing over to the car on the four-lane interstate.

This allowed us to get a feel for the car in both manual and autonomous modes. The switch between the two was achieved with the simple click of a button mounted on the steering wheel, although it isn’t confirmed if this is how the system would operate on a self-driving production model. The transition was seamless, only noticeable by a change of colour on the HUD display. Behind the scenes, the autonomous mode was being operated by computers and monitors hidden out the way in the boot, continuously cross-checking the vehicle’s position and data about its surroundings against a highly detailed roadmap.

BMW’s focus for the test, though, wasn’t just on the self-driving capabilities of this model. Instead, it was focusing on the question of: “What can we offer drivers when they’re not driving?” Essentially what will we be able to do with all the free time we’ll have in a car that doesn’t need us to drive it.

BMW’s answer is its Open Mobility Cloud that acts as a personal journey planner and can be accessed and synced in the home, on a smartphone or through the car. We were given the opportunity to see this in action having handed over control of the 5 Series for several miles on the interstate.

Using Microsoft Cortana virtual assistant software, which has been built into the prototype, we asked the car to book us a table at a nearby restaurant. It automatically picked up that we had a dinner date in our diary and immediately suggested places that had availability for that time. 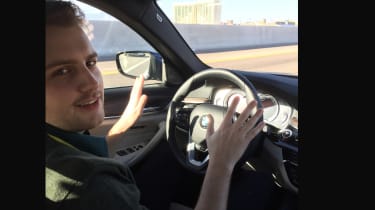 And because the car knows exactly where you are, providing live colour-coded traffic and 3D mapping of nearby landmarks, it can also flag up potential points of interest. Using gesture control - tech that debuted on the 7 Series and will also feature on the new standard 5 Series models - we were able to find out more information about each destination flagged up. Examples included the famous Caesar’s Palace on the Las Vegas strip.

Gesture controls include swiping left and right, drawing a circle with your finger to change the in-car audio volume and pointing to select. There’s no doubt it’s clever but it does take time to get used to and you wonder if using the touchscreen would be both easier and quicker. 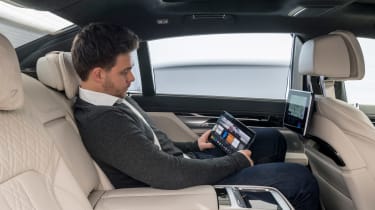 Tablets can also connect to the system and if you’ve been watching a film at home, you can automatically restart viewing on the tablet through the Open Mobility Cloud. With the movie playing, we were then able to activate the prototype’s cinema mode via the tablet which changes the ambient lighting, closes the sunroof and lifts a shade across the rear window to improve viewing for passengers.

On our route we also used the tablet to place an Amazon order. And with PrimeNow linked directly to the Open Mobility Cloud it was able to automatically calculate a pick-up point en-route. It makes same-day delivery look slow.

Perhaps the most impressive part of all this was that it was done while travelling at 60mph with everyday motorists driving all around us. You may think that it would be difficult to hand over control and relax but it was surprisingly easy and the harder part actually came as we merged off the interstate and had to take back control of the car. It’s so easy to disengage from the task of driving and finding a way that ensures drivers are fully refocused is something that must be considered for self-driving production models. 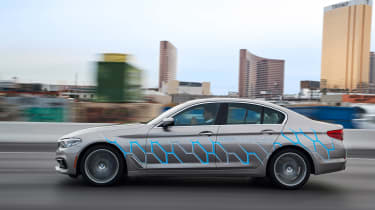 Back in the city streets and back under our own control, the 5 Series prototype allowed us to try out one of the other new functions being trialled: traffic light countdown. The system automatically recognises traffic lights and offers a timer for how long it’ll be red and then how long it’s green for.

In Las Vegas it’s relatively easy because it uses the state’s central traffic light system but BMW claims it’ll work elsewhere as cameras on the car will continually learn where lights are - essentially the more connected BMWs that drive past the location, the stronger the data becomes. 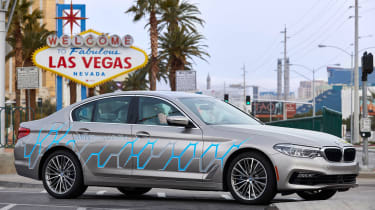 While the new BMW 5 Series already features some of this tech, most of it is still in the research phase. It’s likely, though, that some of it will come on stream by 2021 when BMW has committed to having its self-driving, electric and fully connected iNEXT model on the road.

The beauty of the technology, however, is that when it is released it won’t just be for new models. The connected system on older models is able to be updated over the air just like installing the latest software on your smartphone.