The all-new BMW 5 Series has already impressed us, but does it make as much sense in 520d M Sport guise? 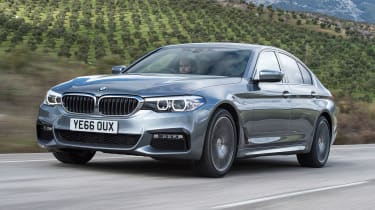 If you’re after a comfortable, entertaining and hi-tech executive saloon the new BMW 5 Series has to be top of your list. Its looks are subjective, but its compelling blend of luxury, performance and ability can’t be questioned.

To say the 5 Series is an important car for BMW would be underdoing it slightly. Now in its 45th year of production it is still the German brand’s global best-seller, and this all-new seventh-generation model is the most advanced yet.

BMW has spent over four years and driven over three million miles in development cars fine-tuning every last detail. An early drive in the 263bhp 530d proved BMW’s meticulous attention to detail had paid off, but the version we have here, though, is the model that will be filling corporate car parks up and down the country: the 188bhp 520d M Sport. 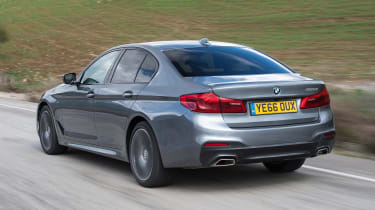 One of the key reasons is down to the leisurely rate that it sips fuel; it can hit 0-62mph in 7.5 seconds (Mazda MX-5 pace) but return a claimed 68.1mpg. More importantly that translates as 108g/km of CO2 and a 21 per cent BIK rating - better than any rival.

As an M Sport (making up over half over 5 Series sales in the UK) it’s also laden with kit and cutting edge tech. Professional navigation, LED headlamps, leather upholstery, digital instrument cluster, 18-inch alloys, a 10.25-inch touchscreen display and an eight-speed automatic transmission all come as standard.

If you’d like a few extra gadgets the £1,495 Technology Pack will be worth looking at. It adds in a digital key fob, wireless charging and Bluetooth, a head-up display, gesture control and a Wi-Fi hotspot. 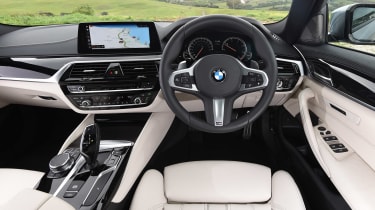 The design and execution of the cabin is also first rate – you certainly wouldn’t feel out of place if you’re stepping down from a 7 Series. A Mercedes E-Class does look a little more elegant inside, but BMW’s iDrive system is the slicker and more intuitive infotainment system to operate.

The 188bhp 2.0-litre diesel under the bonnet isn’t anything new, but at idle its barely audible from the inside. Any sort of vibrations through the controls have been completely isolated, while the range of adjustment in the seat and steering wheel make it incredibly easy to get comfortable quickly.

On the move the engine continues to raise more than a whisper at cruising speeds – only when you extend the engine beyond 3,500rpm does it get a little more vocal. However, rarely do you have to venture that far up the rev range due to all 400Nm of torque being on offer at 1,750rpm. Progress is made all the more calm and serene thanks to the brilliant eight-speed auto which glides its way through the ratios. 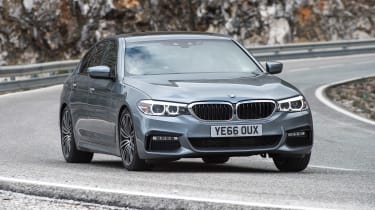 BMW may be famed for its ‘ultimate driving machine’ mantra but in the 5 Series it’s the quality of the ride that quickly grabs your attention. BMW’s Variable Damper Control (a £985 option) serves up comfort, sport and adaptive modes, but in all the ride remains supple and forgiving.

That doesn’t appear to have come at the expense of entertainment behind the wheel, however. The steering isn’t brimming with feedback, but its fast and gives the 5 Series an increased sense of agility. The new chassis allows quick changes in direction to be executed with confidence and precision, too. There’s an overriding sense of composure and accuracy to the way the 5 Series covers ground which you don’t get in other large saloons.