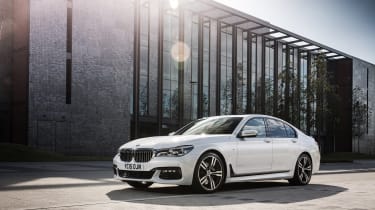 BMW has thrown all its engineering might at the 7 Series, and it’s paid off. The Mercedes S-Class is no longer able to keep the 7 Series at arms length, thanks to the BMW’s beautifully crafted cabin and space-age tech. First-class refinement and comfort haven’t come at the expense of performance, and up against the S-Class it’s also better value and cleaner. Beyond that, the 7 Series will also be influential in shaping future saloon cars from BMW, with its technology set to trickle down the model range.

You might not think it, but the rather unexceptional exterior of the new BMW 7 Series hides a rather exceptional car. It’s the largest model BMW has ever produced, yet is up to 130kg lighter than before thanks to its part carbon fibre construction. It’s kitted out with tech that would embarrass the Starship Enterprise and comes dripping with an attention to detail that wouldn’t look out of place in a high-end boutique hotel.

Every point above is as important as the last and that’s because the 7 Series has long lived in the shadow of the executive limousine of choice; the Mercedes S-Class. BMW has covered all bases with the latest version, giving the 7 its best chance yet of dethroning the Merc.

The exterior design may not be as radical as some of the on-board tech, but the new 7 has a far more elegant shape than its frumpy and forgettable predecessor. BMW says its big limo customers don’t want to draw attention to themselves – and so the design remains inoffensive – but an M Sport pack with beefier bumpers and 20-inch alloys can be added for £3,650, if desired. 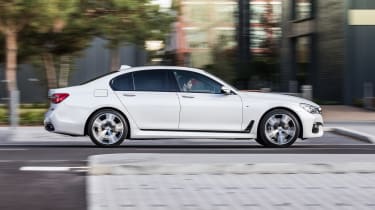 Where the 7 Series really ups the ante is inside. The whole process of climbing in is now more of an event thanks to the digital key fob with 2.2-inch display. It can show you if the car is locked, informs you when a service is necessary, and can even display the car’s remaining range. You can also programme the climate control to come on at a certain time so the temperature is just to your liking before you set off. Just don’t lose it – a replacement is £230.

Climb in the back and the cabin is awash with soft Nappa leather, varnished wood and brushed metals. Then it’s up to you if you want to work or play. Two optional 10-inch TV screens, a Blu-ray drive and massage chairs will help pass the time, or alternatively, on-board WiFi and executive lounge chairs with airline style tables can transform the 7 Series into a mobile office. You certainly won’t be short on space, but if you want more, a long wheelbase version is also available. It adds an extra 14cm to the bodywork for £3,950.

Up front, the 7 Series perhaps lacks the sense of theatre you get in the S-Class, but for some, its more modest approach will appeal. That’s not to say it isn’t a special place to sit. The cabin is beautifully crafted and the gesture control technology for the infotainment system is a proper party piece. 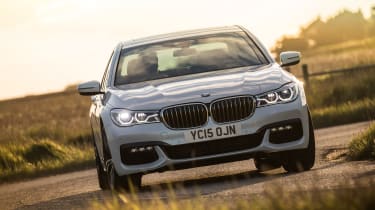 BMW predicts the bulk of the 1,400 7 Series models it’ll shift in the UK each year will be the 730d, which uses a 261bhp 3.0-litre six-cylinder diesel. Our test car also came fitted with optional xDrive four-wheel drive, which adds back on almost half of the 130kg the 7 Series has shed from the previous-generation car. Having said that it remains remarkably efficient for such a large car. Here, the S-Class rival will return a claimed 56.5mpg and emit 132g/km of CO2. Remove the £2,730 xDrive system –­ which we’d recommend – and efficiency improves to 60.1mpg and 124g/km. That’s cleaner than a four-cylinder 99bhp 1.4-litre Vauxhall Astra.

With such an armory of tech on board, you would be forgiven for thinking that how the 7 Series drives is less of a concern to BMW, but you’d be wrong. It’s been designed to be as captivating to drive as it is to relax in. Part of the 130kg weight loss comes from the car’s carbon core, which is based on technology from the i3 and i8.

Self-leveling air suspension is now standard on both axles, while variable damper control is also thrown in. The result is a beautifully supple and cossetting ride. It absorbs bumps and remains completely unflustered over even the most beaten up of surfaces. 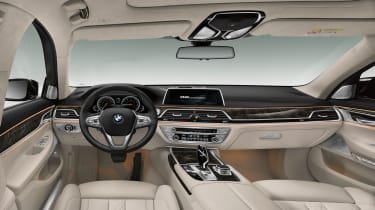 Executive Drive Pro is an active chassis system that keeps the anti-roll bars relaxed when cruising and stiffens them up when cornering to help keep the car stable. You’d stop short of calling it agile, but the 7 Series doesn’t mind being manhandled into a corner. The steering is very light and doesn’t feed back much information but it’s responsive and enables you to carve together a set of sweeping bends with greater ease than you can in an S-Class.

BMW has also added in a new Adaptive setting to its range driving modes. Rather than toggling between eco, comfort and sport, the new setting adjusts the throttle response, damping and steering automatically, depending on the road conditions ahead. It analyses the data from the navigation and sets up the car accordingly.

The 7 Series goes about its business fuss-free and because you’re so well isolated from the elements and the engine is so smooth, it’s deceptively quick. The eight-speed ZF gearbox is the perfect partner for the 3.0-litre straight-six engine, effortlessly zipping up and down the ratios. At 70mph the engine is barely pulling 1,500rpm, a jab at the throttle sees the transmission drop a couple of gears and 620Nm of torque delivers a surge of acceleration.

The 730d delivers all the performance you’re ever likely to need, but next year BMW will introduce the V12 powered 760i, giving the 7 Series Space Shuttle thrust to match its on-board tech.

For more on the BMW 7 Series, visit the Auto Express reviews page.