The concept is simple - take all the refinement and luxury of the X5 and shrink it into a smaller SUV package. 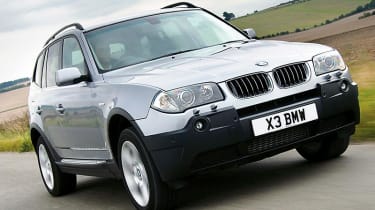 The X3 3.0d stirs mixed emotions. The engine is one of the best diesels available but, as part of the X3 package, it is pricey for a compact SUV. Rivals can match the BMW's handling and performance and, if you're not bothered about the badge, better value can be found elsewhere. We suggest waiting for Land Rover's new Freelander.

The concept is simple - take all the refinement and luxury of the X5 and shrink it into a smaller SUV package. BMW's X3 is the only real compact executive 4x4 on the market, but it has always been compromised.

True to the German firm's philosophy of building driver-focused cars, the X3 delivers nimble handling and sharp steering. Unfortunately, it lacks practicality, has dubious styling and suffers from poor interior quality. So how has BMW tried to increase the appeal of its smallest SUV? Simple: by giving it one of the best diesel engines in the world.

This should add even more excitement to the driving experience. Lifted straight from the X5, the 215bhp 3.0-litre six-cylinder propels the X3 from 0-60mph in 7.4 seconds. Top speed is 130mph on SE models and 136mph on Sport and M Sport variants.

The engine gives effortless performance, and it's flexible, too. An impressive 500Nm of torque is available from only 1,750rpm for a sharp throttle response in every gear. The only downside is that it's not particularly easy to drive in town, because of the heavy clutch and the six-speed gearbox, which requires a firm hand.

Yet an SUV must do more than just entertain the driver. There's a surprising lack of space in the luggage area although thankfully, passengers in the rear fare better, with lots of legroom.

The main advantage for most diesel buyers is a reduction in fuel bills, but the manual 3.0d returns 35.8mpg on the combined cycle, and we managed to average little better than 32mpg. Opt for the slower X3 2.0d, however, and the figure rises to 39mpg.

At £31,910, the SE costs £3,000 more than the equivalent 2.0-litre, but £4,655 less than the comparable X5. The cabin of our test car suffered no squeaks or rattles, and luxuries such as cruise control and parking sensors are standard. Yet aside from its dynamic ability, the X3 offers nothing the new Toyota RAV4 and Nissan X-Trail don't do for two-thirds of the price.