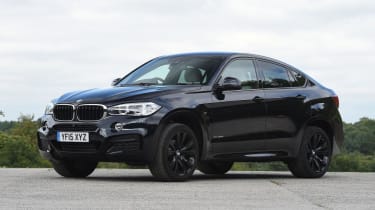 There’s a noticeable element of style over substance with the X6, but if ultimate carrying capacity isn’t your highest priority, then this is a car that’s surprisingly easy to recommend. That’s because, as you would expect of anything wearing that hallowed BMW badge, the X6 is genuinely enjoyable to drive, superbly put together and features all of the latest safety and luxury tech you could possibly ask for. It’s also supremely qualified for towing, so if you’ve got a large caravan, few vehicles will pull with such ease. Most of the cars for sale are still under warranty but, so far at least, reliability seems to be another of the X6’s trump cards, making this a relatively painless car to own.

BMW introduced the original X6 to some sharp intakes of breath in 2008. Lots of people couldn’t understand the brand’s rationale for building a huge SUV (or SAC – Sports Activity Coupé in BMW parlance) that was less useful than the X5 on which it was based and, to many eyes, less handsome.

But these drawbacks didn’t stop the X6 selling like hot cakes, so in the end it wasn’t a big shock when, in 2015, a second take on the formula was launched. With more efficient engines and more hi-tech kit, plus extra interior and boot space, the X6 Mk2 has, unsurprisingly, proven another success. 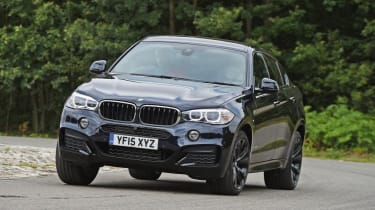 In the meantime, in April 2015, the monstrous X6 M hit dealers; while it’s not a full-blown M car, with 567bhp on tap and a sub-five-second 0-62mph time, this has a turn of speed that belies its size and weight.

As standard all X6s came with an eight-speed automatic transmission; there’s no manual option. Buyers could choose Pure Extravagance packages for the interior (it brought two-tone leather with contrasting stitching) and exterior (alloy and gloss black highlights), plus soft-close doors, an electric glass sunroof and upgraded entertainment.

No X6 is cheap to buy or run, but the petrol-engined editions are especially expensive to own, which is why most of the X6s for sale are diesels. The 30d isn’t slow by any means, but a 40d feels noticeably more rapid and you won’t pay a big premium to upgrade. 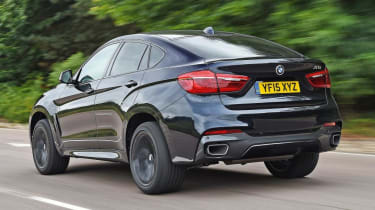 Alternatives to the BMW X6

The X6 had only one true rival for a long time, because until the likes of the Audi Q8 and Lamborghini Urus arrived, Mercedes’ GLE Coupé was the only other full-sized coupé-SUV on the market.

However, the Range Rover Sport, Maserati Levante and Porsche Cayenne can give the BMW a run for its money when it comes to luxury, performance, image and build quality. The Audi Q7 is worthy of consideration; as a seven-seater this puts an emphasis on usability, although it’s also fast, well equipped and luxurious.

If you like the idea of an X6 but it just seems too big, unwieldy and costly, a BMW X4 might suit better; it’s a shrunken X6, so you’ll pay less to buy and run one.

The X6 is ideal for towing. Not only can it pull 3.5 tonnes, but trailer stability control also comes fitted as a standard feature.

Know what you’re buying; the first-generation X6 was codenamed E71 by BMW, whereas its successor was referred to as F16.

All models come with an excellent set of xenon headlights, but the adaptive LED system is an especially impressive set-up.

Another worthwhile and sought-after option is the head-up display, which shows five pieces of information to the driver. 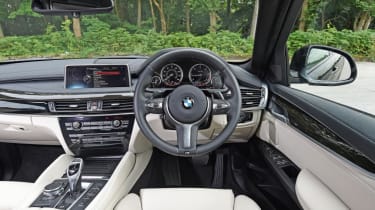 Shared with the X5, the X6’s interior is swathed in premium materials and well stocked with the latest kit. There’s lots of space up front, but headroom in the rear is somewhat restricted by the sloping roofline. All-round visibility isn’t great, either (although the optional Surround View system helps). Boot space expands from 580 to 1,525 litres; the latter figure trails the X5’s by 345 litres. 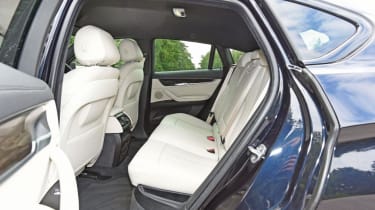 The original X6 was recalled eight times between 2009 and 2016 for problems including brake disc failure, electrical short circuits and failure of the steering power assistance. This latter issue also affected Mk2 cars built up to December 2015. These could suffer from contact failure, which could lead to a short circuit; as BMW put it, this could cause “a localised thermal event”.

Neither the X6 nor its X5 sibling has appeared in our Driver Power satisfaction surveys in recent years, but it’s clear the owners who have responded are generally pleased with their purchases. The average owner’s score for the X6 on our sister title Carbuyer.co.uk is 4.7 out of 5 (the X5 gets 4.4); a stiff ride for one driver is the only black mark on an otherwise clean sheet.