An all-new BMW X6 has arrived, but is it little more than a rebodied X5? We find out… 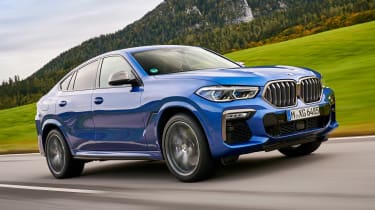 It’s all-change for the BMW X6, but there’s nothing different about what this car represents. BMW has tried to give it an identity that separates it from the X5, but it’s still very much an offcut of that car, shaping up as less practical and more expensive than its SUV sibling. It’s the penalty buyers will pay for the coupe shape, but regardless, that’ll be the X6’s main draw for its willing customers.

The BMW X6 is back, and if you’re in the market for a large coupe SUV, this is the one with the most history to hang its ostentatious image on.

Introduced in 2008, the X6 was the first SUV from a mainstream manufacturer to adopt an unconventional, sportier silhouette. Around 480,000 global sales, three generations and a handful of smaller siblings later, and nearly every top-end manufacturer is at it.

The basics go unchanged – under the coupe-styled bodywork, it’s little more than a rebodied X5. What that means, in hard reality, is that this is a slightly less practical offering than the car it is based on, for slightly more money – a couple of thousand pounds depending on which one you buy. 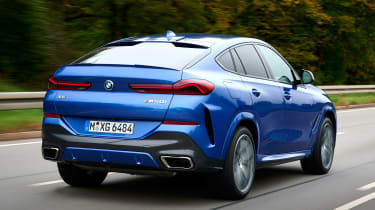 While the front end of the car is carried over almost unchanged, the rear end is nipped away, affecting boot space. The X5’s 645-litre load bay is cut to 580 litres, but there’s no avoiding the fact that this is still a large car, and the cargo area is sizable regardless. Fold the rear seats via a 40:20:40 split, and the total space swells up to 1,525 litres.

The brand has tried to find some new ways to differentiate the X5 from the X6 – in more ways than just shape. For instance, the newcomer is available with an optional light-up grille, called ‘Iconic Glow.’ It forms part of the daytime running lights, but in reality it’s somewhat underwhelming. On the up side, the X6 comes with adaptive LED headlights as standard.

The powertrain options remain all but the same, however, with six and eight-cylinder petrol and diesel versions offered. No plug-in hybrid has been confirmed, but a hot-rod X6 M with up to 616bhp is coming in 2020. 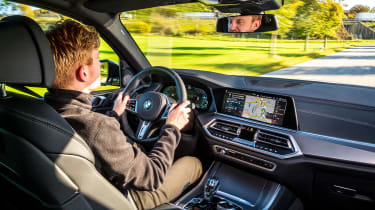 Driven here is what shapes up as the current range-topping version of the latest X6. The M50i model uses a turbocharged 4.4-litre V8 producing 523bhp and 750Nm torque, and it sends power to an xDrive all-wheel drive set-up through an eight-speed automatic gearbox with wheel-mounted paddle shifters. It gets an aggressive bodykit and 22-inch wheels as standard, too.

This model represents something of a niche within a niche, however. In the grand scheme of things this is a SUV few will buy, and even fewer still will take on this hot V8 version. Yet it’s not without its charms.

This model is unapologetically tilted towards performance and outright drama. BMW claims just 26.4mpg; the entry-level xDrive30d six-cylinder diesel strikes, on paper, as the X6 that’ll fare best in the real world, blending strong fuel economy with hot-hatch like performance.

The M50i is a heavy car, tipping the scales at well over two tonnes, but the muscle mustered by the 4.4-litre unit under the bonnet easily wins out if you pin the throttle. This is an engine we’ve found fast and frenetic in other BMW applications, and it’s no different here, surging through its rev band using all the might of the 750Nm torque on offer and serving up a raucous note with the valves of the M Sport exhaust system wide open.

But that’s this car’s dynamic appeal in a nutshell, as beyond hot-rod straight-line performance and noise, the X6 M50i has little else to offer. While M division twin-axle, self-levelling air suspension is standard, it’s a set-up that’s better at trying to soften the road surface than keep the sheer mass in check, and while the steering is as well weighted and reactive as any other modern BMW, the X6 is simply too large to be any more than a straight-line weapon. Framed within the context of what it is, it’s certainly good enough to drive – just like the X5. 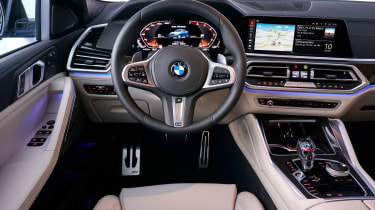 Slacken off the performance by keeping it in Comfort mode and the X6 turns into a cruiser. There’s always a firm edge to the suspension but it’s not unacceptable, while the V8 burbles away unobtrusively.

The interior remains a high point. The latest BMW cabins forego a little flair, but they’re well made and functional, while the infotainment on the X6 – the latest iDrive system, no less – is still one of the best on the market, operated with a rotary dial on the transmission tunnel. Information is presented across two sharp 12.3-inch displays in the cabin.

The M50i model comes with black Vernasca leather sports seats as standard alongside an M Sport leather steering wheel. All versions of the X6 come with a cruise control with braking function, but the Driving Assistant Professional set-up, introducing semi-autonomous controls and functions, is optional. Automatic parking is included by default, however, as is the Drive Recorder function, doubling as a built-in dashcam.