The Z4 roadster is now available with an entry-level four-cylinder engine. We drive it… 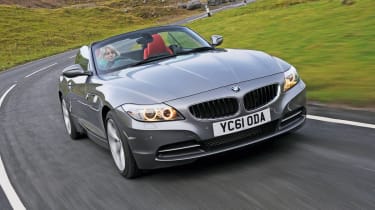 With a new 2.0-litre four-cylinder turbo, BMW’s entry-level Z4 loses some of the charisma of the old naturally aspirated six-cylinder 23i it replaces. However, it more than makes up for this with its lower price, superior standard kit, improved running costs and the greater pulling power of its engine. As a result, the cheapest Z4 is the pick of the range. Sadly, it’s still not the pick of the roadsters.

Downsizing. Everybody’s at it – including BMW. When it launched the Z4 three years ago it insisted the car would only be available with six-cylinder engines. But times have changed – large-capacity naturally aspirated engines are making way for smaller turbos. And so the Z4 range now kicks off with a 2.0-litre four-cylinder turbo rather than a 2.5-litre six. Is this a change for the better?
Financially, the answer is a resounding yes. The new 20i entry model costs nearly £1,000 less than the old 23i and now gets leather seats, USB for the stereo and Bluetooth as standard.
It’s 25 per cent more efficient, too. A 40g/km improvement in emissions means it costs £280 less a year in road tax for the first year and will save you a further £80 annually thereafter.

[[{"type":"media","view_mode":"content_narrow","fid":"68419","attributes":{"alt":"","class":"media-image"}}]]
But what about the numbers that really matter for sports cars: performance stats? Here the 20i trails the old 23i, but not by much.
It has 19bhp less power (at 181bhp), takes three tenths longer to cover 0-62mph (with a time of 6.9 seconds) and tops out at 146mph instead of 150mph.
That’s not as bad as it sounds, though, especially as the new turbo feels more punchy on the road, thanks to a 20Nm increase in torque. And as the 270Nm peak is available from only 1,250rpm, the engine pulls keenly everywhere in the range with no noticeable turbo lag.
So it’s perfect then? Sadly not. While the new engine doesn’t mind revving, it doesn’t do so quite as keenly as the old six-cylinder. Nor does it sound as good.
It’s not bad for a four-cylinder, but a large part of the sensory experience in a roadster is the exhaust note, and there’s no getting away from the fact that the Z4 20i’s doesn’t make the hairs on the back of your neck stand on end like the 23i’s did.
It’s business as usual for the rest of the package. The Z4 looks great, has a stylish, solid cabin and its folding metal roof gives greater refinement and security than a soft-top. But the same criticisms remain – boot space is restricted with the hood down and the steering isn’t as responsive as a Porsche Boxster or Mazda MX-5’s.
But the Z4 has been set up as more of a comfortable GT than a sharp-edged sports car, and in that respect the relaxed nature of the new 20i engine fits the bill.