Morris Marina - the worst cars ever

The Morris Marina is that rare thing, a truly bad car that was a sales success. There’s no accounting for taste 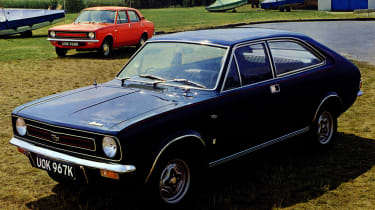 If any car deserves a place in this list, it's the Morris Marina. While it sold in big numbers - over a million in 13 years, if you also include the later Morris Ital - it was only ever meant to be a stop-gap while British Leyland got its house in order.

It took only 18 months for the Marina to go from drawing board to production, but even in that short period it was beset by problems. The idea was to keep it simple to get it on sale ASAP, but that meant some good ideas were dropped before production. The Marina was designed to compete with both the Ford Cortina and Escort, so it fell between them in terms of size, while a two-door fastback version was meant to be a rival to the Ford Capri. But to cut costs, the fastback ended up using the same doors as the saloon, which compromised its sporty looks, and it also ended up being the cheaper version of the Marina.

That wasn't the only piece of cost cutting, either. Rather than develop a new suspension set-up, the Marina used the obsolete chassis components from the ancient Morris Minor, while a switch to a different set of BL engines meant the car's design had to be tweaked to make room for them, resulting in a bloated look for the car.

A poor suspension set-up and live rear axle meant the Marina handled pretty poorly, with the rear end liable to bump steer on rough roads, while early examples, especially ones with the larger, heavier 1.7-litre engine, had chronic understeer due to the wrong front suspension being fitted on the production line. Another 'quirk' was that windscreen wipers were fitted the wrong way around, because engineers reported that they lifted from the windscreen when vertical, which was thought to be distracting to drivers. Rather than remedy the problem, simply switching them around was thought to be a good enough fix.

Surprisingly, the Marina was a sales hit, although poor quality, the propensity to rust and the cannibalising of Marinas to keep other BL models of the era going means that today there are only a handful of cars left on the road. Although it seems like it's a car that's hard to feel sorry for.