Car buyers across Europe voted in the 2017 Golden Steering Wheel, and now we name the winners of the coveted awards… 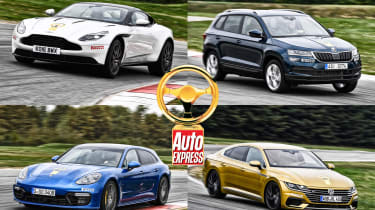 The Golden Steering Wheel awards are among the most coveted in Europe, having been run by Auto Express’s sister publication Auto Bild for decades. A mix of reader polls and expert opinion, the awards mark out the best new cars to be launched in the past 12 months.

We asked for your votes, and now, after an intense judging session in October, we can announce the winners – alongside the cars UK readers chose. It’s clear British buyers have different tastes to those on the rest of the Continent; not one choice was the same. For each winner we’ve also included our picks of the range.

What are the Golden Steering Wheel Awards?

The Golden Steering Wheel awards are put together by Auto Express’ sister publication, Auto Bild. The contest has been running since 1978, and each year readers from all our sister titles across Europe get a chance to decide what they think are hottest and best new models on sale.

In the 38 years since the first awards ceremony an awful lot has changed in the motoring world; technology, safety, performance and comfort levels in new cars has increased beyond all recognition. However, while the categories have changed significantly, the process of selection has stayed largely the same for the Golden Steering Wheel awards.

The criteria is simple: the car needs to have been launched in the last 12 months, and has to fit into one of the eight categories outlined in the initial vote.

From small cars through to sports cars and SUVs, it covers the full spectrum of the motoring world, while there’s even a category for the “most beautiful car”.

Every Golden Steering Wheel category is hugely competitive, with a number of impressively talented cars jostling for buyers’ attention. After the public vote, the finalists from each category find themselves in the hands of a panel of expert judges from the UK, Germany and France. After rigorous evaluation, the overall winners are announced.

Below we give you the 2017 Golden Steering Wheel Award winners but not only that, we also show you which cars our readers preferred in the UK – the results compared to the rest of Europe may surprise you. Our ‘pick of the range’ in each category also shows you which engine and trim level you need to get the best out of each victorious car. Let us take you through 2017’s Golden Steering Wheel Award winners below... 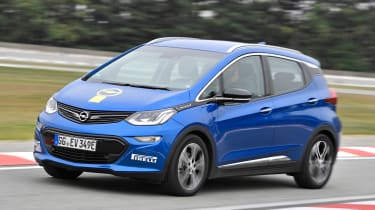 Our pick: Not available in the UK Price: N/A

This year’s small car category was mostly made up of traditional hatchbacks and superminis, but Opel’s all-electric Ampera E took the top spot. It’s not on sale in the UK, even as a Vauxhall, yet it’s a convincing prospect. With an all-electric range of over 300 miles – more than the Renault Zoe, Nissan Leaf and BMW i3 – it’s one of the most versatile EVs on sale. It still had a tough job on its hands to beat the excellent new Ford Fiesta, VW Polo and Honda Civic in this category, though. 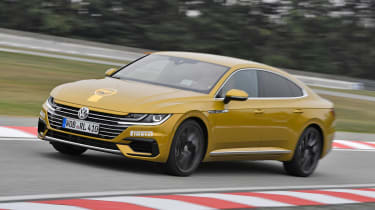 With its striking looks, the Volkswagen Arteon is the most eye-catching car in its class, but it faced tough competition in the likes of the BMW 5 Series and Kia Stinger. Still, the Volkswagen is comfortable and easy to drive, with a plush interior and lots of standard equipment, which helped it to take the win in its category this year. As it’s based on the excellent Passat, the Arteon is refined and spacious as well.

Lawrence Allan, senior staff writer: “We love how the Arteon looks, but this appeal runs more than skin deep; the VW has loads of equipment as standard and features a high-quality feel inside as well. It’s a great choice for style-conscious commuters.” 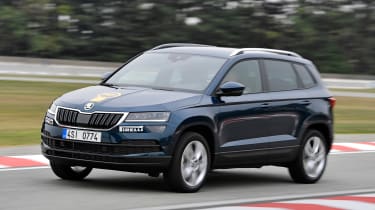 The Skoda Karoq is the newest car in the line-up here, and takes the top spot in the compact SUV section. After our first drive of the car, it’s easy to see why: it feels like a scaled-down version of the brilliant Kodiaq. There’s loads of space inside, and the new 1.5-litre petrol engine is smooth and refined. There’s plenty of kit, too, including Skoda’s excellent Columbus touchscreen infotainment system. Its rivals included the Toyota C-HR and Mitsubishi Eclipse Cross.

Sam Naylor, senior reviewer: “The Skoda Karoq looks set to take on the best cars in the compact SUV class, because it performs well in all the right areas. It’s practical, good to drive and has a wide range of engines to choose from.” 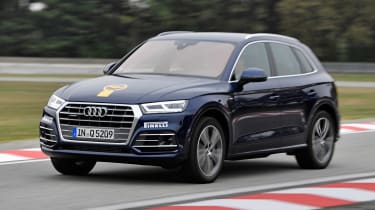 The classy Q5 edged managed to take victory in the large SUV category this year from rivals including the Volvo XC60 and Alfa Romeo Stelvio. The smart looks, high-quality cabin and efficient engine range helped the Audi bag the top spot, and on mainland Europe’s smooth roads it feels composed and comfortable, too. It’s not quite as compliant on British tarmac, although the Q5’s upmarket feel is as obvious as ever.

Richard Ingram, reviews editor: “Audi’s Virtual Cockpit system was one of the first set-ups of its type, and it’s still one of the best. It displays sat-nav and other key information closer to the driver’s line of vision, with sharp graphics and lots of useful functions.” 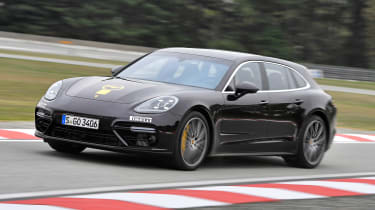 Taking on the Lamborghini Huracan Performante, Honda NSX and Aston Martin DB11 wasn’t an easy task, but Porsche’s Panamera Sport Turismo sealed its place at the top of the sports car category this year with its incredible range of ability. It’s fast in any form, and the turbocharged V6 has amazing performance for such a large car.

James Brodie, staff writer: “The Panamera Sport Turismo only has 25 litres more boot space, but we think it’s even more stylish than the saloon. The extra room is accompanied by a third seat in the back, too.” 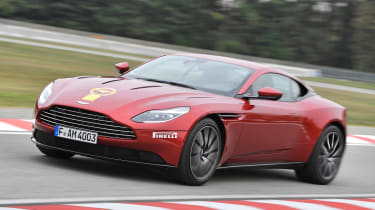 It was no surprise to see Aston Martin’s classy new model pick up this coveted award. The DB11 shares familiar design cues with recent Astons, while still having a unique style of its own. It’s elegant without being old fashioned, and sporty without being outlandish – a perfect combination that adds up to make 2017’s most beautiful car. Every model in each category was eligible, so the Aston is a true overall winner.

What do you think of the 2017 Golden Steering Wheel winners? Let us know below…